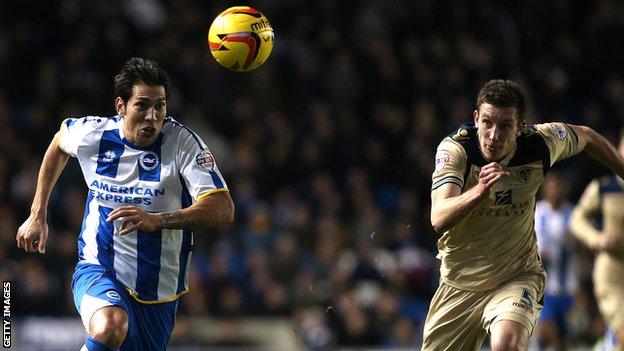 Leonardo Ulloa's second-half strike helped seventh-placed Brighton edge past Leeds United and move within a point of the Championship play-offs.

The Argentine forward won the game for the hosts when he was left unmarked to poke Kazenga LuaLua's left-wing cross past Leeds goalkeeper Paddy Kenny.

In a match of few chances, Ulloa fired into the side-netting before half-time.

But chances were rare for Leeds, who were bidding for their third consecutive win against a backdrop of off-the-field chaos.

Prospective owner Massimo Cellino was not present at the Amex Stadium ahead of his meeting with the Football League on Wednesday, despite suggestions that he would attend the match,

Cagliari owner Cellino has agreed to buy 75% of the Yorkshire club and expects league bosses to approve the deal after talks.

Whites boss Brian McDermott, sacked by the Italian before later being reinstated, watched his side toil in a match where they knew victory would be enough to climb above their hosts.

However, Brighton looked the more likely to secure maximum points as they upped the tempo in the second half.

Ulloa, who was also the match-winner in Brighton's 1-0 win against Doncaster on Saturday, looked their biggest threat and he duly obliged with his eighth goal of the season to sink the visitors.

But Ulloa's intervention was enough to close the gap on sixth-placed Reading, while Leeds drop to 11th.

"We have a meeting [between the Football League and prospective Leeds owner Massimo Cellino] planned for Wednesday and I am desperate for it to be sorted. I have no indication of what the future holds for me.

"Cellino is meeting the Football League and I have no idea when I expect to meet him. I think the most important thing is to know who the new owner is going to be."

"We've won the last four home matches by one goal to nil and although it's a good habit we need to be more clinical in front of goal.

"We deserved to win. We created the better chances and it was not easy against one of the league's better quality opposition.

"We are one point off the play-offs but I never think of two weeks ahead."