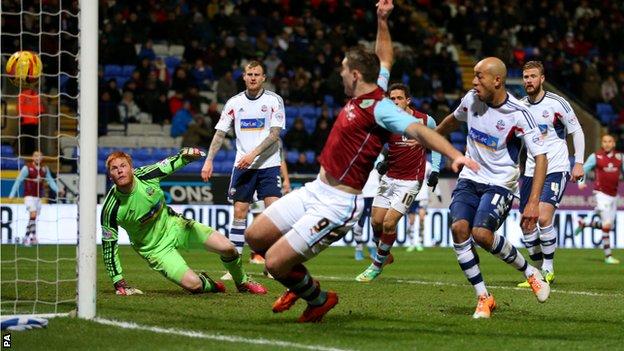 The Wales international striker sneaked in at the back post to score his 16th goal of the campaign.

Chung-Yong Lee came close to putting the home side into the lead when his shot deflected against the crossbar.

After a strong first half Burnley went close after the break when David Jones forced a superb save from Adam Bogdan.

And the Clarets went on to close out the game and open up a three-point gap over QPR, following the Londoners' defeat at fellow high-fliers Derby on Monday.

The hosts had the better of the opening exchanges and nearly went ahead when Lee's effort ricocheted off Ben Mee and looped on to the woodwork.

Bogdan did well to palm away Jones's driven left-footed shot but the Bolton stopper was helpless when Scott Arfield picked out Vokes for a tap-in just before the hour mark.

The hosts lacked a cutting edge throughout and despite the introduction of Mark Davies and Andre Moritz after going behind, their response was limited to speculative efforts from former Burnley midfielder Chris Eagles.

"It's a local derby, it means something beyond just a result and then the programme gives you fuel as well.

"You already want to win because it's a local derby, it means a lot, it's a big game; so I thought that was interesting.

"I just took a few of the quotes and went up to a couple of them and went 'apparently we're having a tough time'. At the bottom of the fact-file it says: 'league position - second' ...not so drastic. I just thought that was bizarre, it's interesting how people view how we're doing.

"I'm not having a dig at anyone, I just think it's really interesting that people view it as 'loosening your grip, you're having a bad time and you need to kick-start your season'."

"I felt Burnley edged the second half. I don't think we deserved the three points, I felt we deserved a point. But, when you're playing against an in-form side who are playing on top, these things go against you."