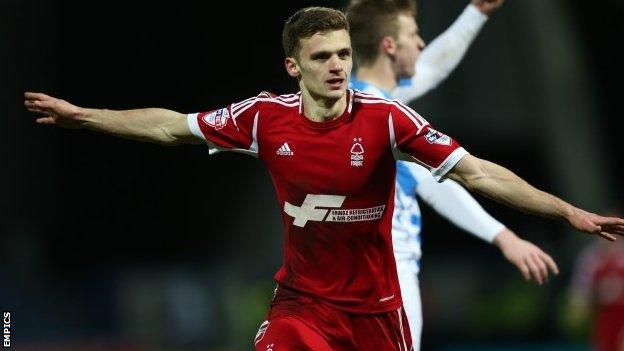 Jamie Paterson scored twice as Nottingham Forest extended their unbeaten league run to 13 matches with an excellent win at Huddersfield.

Paterson scored the opener in the 63rd minute when he headed in Danny Fox's cross.

His second was a sublime effort - a precision finish past goalkeeper Alex Smithies after weaving past several Terriers challenges.

Henderson made it 3-0 when he sidefooted in from eight yards.

It was Huddersfield's first home league defeat since mid-December. The result leaves the Yorkshire side in 14th, while Forest are fifth on 54 points - five behind second-placed Burnley.

Forest went close soon after the restart when Rafik Djebbour nodded Reid's cross wide. They finally took the lead when Paterson was more accurate with his headed effort, before the goalscorer added a brilliant second soon after - his seventh goal in nine games.

Billy Davies's side rubberstamped their fifth league win on the road this season when Henderson latched on to a rebound and tucked in from close range in the 88th minute.

"I'm thinking about trying to get my injured players back as quickly as possible - that's my key priority.

"I'd certainly be more confident if we had that quality still in the squad and available, but unfortunately we've not.

"It's not an excuse, it's a fact. But we'll continue to do what we can. We lost Guy Moussi here to a calf injury, which is another blow, but that's what happens."

"It looked like a nil-nil for most of the game. We shot ourselves in the foot. We certainly didn't play well throughout the game and it was disappointing from that aspect.

"You could tell Forest were going for promotion and we're in mid-table.

"Forest were excellent, I've got to say that. They closed down well and worked harder than us."