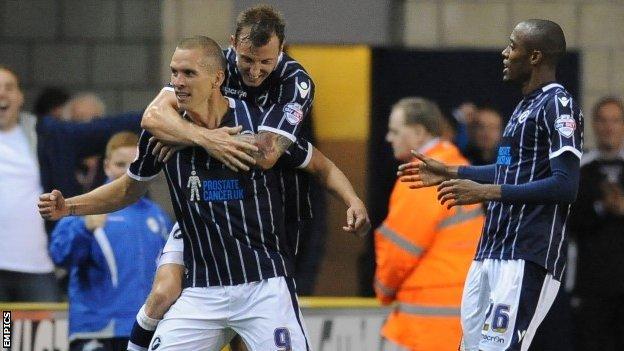 The forward, who is on loan from Leeds, headed home an equaliser in the 75th minute after Joe Ralls had volleyed in from close range for the Glovers.

Ishmael Miller hit the crossbar in the first half and also had an effort ruled out for the home side after the break.

Millwall goalkeeper David Forde was in fine form throughout and produced an array of superb saves to keep the league's bottom side at bay.

Yeovil are six points adrift of Millwall, who sit one place outside the relegation zone.

The struggling hosts had much the better of the first half and came close to breaking the deadlock when Miller's deflected effort struck the frame of the goal.

Forde did brilliantly to deny Joel Grant in the 29th minute and also managed to keep out Miller's back-post header shortly after.

Miller thought he had opened the scoring just beyond the hour mark but the referee ruled it out for a pull back on Shaun Williams in the build up.

However, there was nothing wrong with Ralls's goal a few minutes later as he coolly finished from James Hayter's cross.

Tom Lawrence's long-range effort was saved superbly by Forde as Yeovil went for the winner while Millwall's Danny Shittu headed narrowly over in stoppage time.

"It's very frustrating as we had most of the game and a few chances we didn't take, and of course Millwall came here and a draw is probably better for them than us.

"They only had one late real chance which we gave them, let the cross come in and let their best header of a ball score.

"It feels like a loss because we needed to win, but now we have to go and get a result somewhere else."

"It's a mixed bag for me - we wanted three points but the lads keep pleasing me, particularly after going one down.

"I can't ask the boys to try any harder. You could see by the team I selected that we had a lot of forwards on the pitch, but we were disciplined.

"I'm delighted with our lads' characters. We got stronger instead of weaker and by the end I was probably happy to take a point."