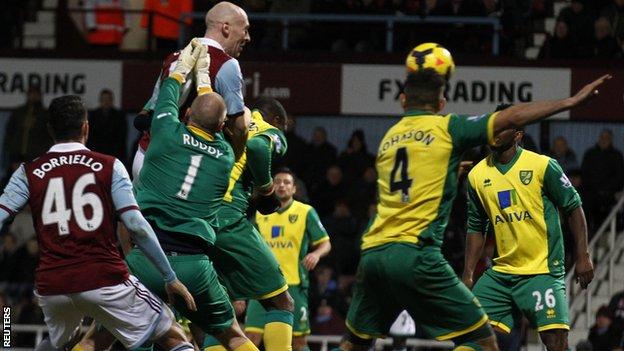 West Ham beat Norwich with two late goals to secure a third successive win and move up to 10th in the Premier League.

James Collins headed home in the 84th minute from Mohamed Diame's left-wing cross before the midfielder scored himself with a breakaway goal.

Norwich trio Gary Hooper, Robert Snodgrass and Alex Tettey were all denied by Adrian in the first half.

And West Ham went on to keep their 13th top flight clean sheet this season.

After starting last weekend's round of fixtures 18th in the Premier League, the result continues a rapid but deserved rise up the table for Sam Allardyce's vastly-improved side.

Since holding Chelsea to a draw at Stamford Bridge on 29 January, they have beaten Swansea, Aston Villa and Norwich - all by a 2-0 scoreline.

West Ham have kept four consecutive clean sheets in the top flight for the first time since December 1985.

They enjoyed some good fortune against the Canaries, with Adrian their hero for the first 80 minutes of the contest.

The Spanish goalkeeper made a fine save low to his left from Hooper's header, before denying Snodgrass when the Norwich midfielder was put clean through on goal.

Both chances were created by 19-year-old winger Nathan Redmond, who was causing problems with his pace on the counter.

James Tomkins made a superb tackle to deny Bradley Johnson while, at the other end, John Ruddy dealt easily with straightforward efforts on goal from Matt Jarvis, Mark Noble and Kevin Nolan.

As the first half drew to a close, Adrian made arguably his best save of the match when he turned away Tettey's shot following Hooper's pass.

West Ham improved after the break, slowly winning the midfield battle as Norwich's raids down the flanks became less frequent - Hooper spurning another good chance to open the scoring.

Substitute Diame should have done better when played in by Nolan but Ruddy made a fine save, while Joseph Yobo lifted a shot over the bar after Adrian had failed to collect a corner.

As the game opened up in the final 10 minutes, West Ham took the lead when Collins evaded his marker and beat Ruddy to Diame's high ball from a short free-kick to bury a header into the back of the net.

With Norwich pushing forward for an equaliser, Diame ensured a flattering margin of victory by breaking away from his own half before beating Ruddy with the aid of a deflection.

"I am very, very frustrated. When you come here, you know you'll be up against a direct and physical game and you have to match them.

"For nearly all the game we were able to do that but you rely on getting a little release by scoring goals.

"It is a bit too familiar, creating chances and not putting them away. We put more pressure on ourselves."