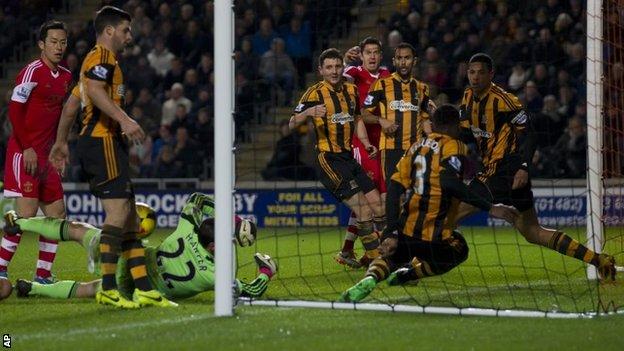 Jose Fonte scored the only goal as Southampton did enough to see off Hull.

Both sides hit the woodwork in the first half, Shane Long heading off a post for Hull and Jay Rodriguez's curling effort coming off the crossbar.

Fonte did break through, though, with an effort awarded via the Goal Decision System after a goalmouth scramble.

Nikica Jelavic and Sone Aluko had late chances for Hull and Jack Cork, who has never scored for Saints, hit the angle of bar and post in the last minute.

Southampton have won back-to-back away Premier League games for the first time since September 2001, 104 matches ago.

Hull dropped down to 13th in the table and are now only three points above the relegation zone, while Southampton are up to eighth, only two points behind Manchester United.

The Tigers' success this season has been based on clean sheets rather than goals and they rarely looked like scoring in a game where they bypassed the midfield and relied on long balls.

The Saints started on the front foot and should have led early on when Rickie Lambert hit a stanchion from 10 yards out.

Hull lost Paul McShane to injury early on when he collided with goalkeeper Steve Harper as they kept out a Lambert effort.

Hull's best chance came when Long hit a post and Boyd's bouncing shot was tipped over the bar by Artur Boruc.

After a scrappy period, the next opportunity came when Rodriguez hit the crossbar with a fantastic curling effort from just outside the box.

After the break, the Saints continued to dominate possession and Rodriguez and Lambert both had shots blocked before the latter had a low effort from an angle saved by Harper.

When the goal came, it was in a scramble.

Fonte had a header saved well by Harper, Rodriguez's follow-up shot was kept out and Fonte's shot was blocked by Maynor Figueroa. Lambert slammed the rebound in to the net but it was not immediately obvious whose goal it was until the DRS indicated that Fonte's earlier effort had crossed the line.

Jelavic chipped over late on and substitute Aluko forced a low save from Boruc as Hull failed to score in a 12th Premier League game of the season, a joint-second high in the division.

Hull City boss Steve Bruce: "The [Paul McShane] X-rays are clear. His ankle is in a horrible position. We expect ligament damage - we'll find out how bad the injury is tomorrow. It disrupted us for a while.

"Southampton are an excellent side. We had to be at our best and we weren't. We went too long and direct to our strikers too often.

"We have to be honest - the better team won. We were never away from it [the relegation zone]. We've got 12 games to go. We're in a decent situation. It's all to play for."

Southampton boss Mauricio Pochettino: "We put in an amazing shift. We dominated the entire game from start to finish. We're very happy with the performance.

"The entire team always plays for each other. That's the Southampton way.

"It's very important we take it game by game. We focus on the next game ahead. Now we'll be focussing on the FA Cup game away at Sunderland, which is an important match."