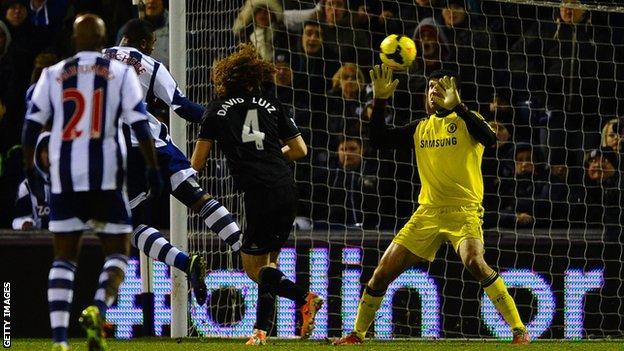 The Blues looked set to open up a four-point lead at the top of the Premier League table when Branislav Ivanovic swept home following a David Luiz flick from Willian's corner.

But the Baggies moved out of the bottom three after Anichebe got ahead of Luiz to head home Saido Berahino's cross.

But Jose Mourinho's side will be replaced at the top of the table if either Arsenal or Manchester City win on Wednesday. The Gunners are at home to Manchester United, while City host Sunderland.

Anichebe's 87th-minute equaliser will raise questions as to whether Mourinho's side, who were held to a goalless draw by West Ham two weeks ago, have the quality to win the title.

"Without doubt a missed opportunity for Chelsea. They should have won comfortably but credit to West Brom for getting back into it. You start to wonder: who is going to win this Premier League?"

In a game that will not live long in the memory, Ivanovic's goal in the third minute of stoppage time was reward for a dominant first-half display.

Chelsea smothered West Brom with possession yet Willian's long-range effort was the closest they came before their Serbia defender pounced from inside the six-yard area.

Eto'o had already forced a fine save from Foster, while the lively Willian was denied a chance to open a two-goal cushion by the Baggies keeper.

West Brom, who came from behind to force a 1-1 draw against Liverpool on 2 February, again displayed their battling qualities as they rallied in the final quarter of the game.

But skipper Chris Brunt and James Morrison lost their composure when presented with chances to equalise.

And 21-year-old striker Thievy Bifouma, making his first start since joining on loan from Espanyol, fired across the face of goal.

That looked it for the hosts but, moments after Blues defender Gary Cahill had been treated for an injury, Anichebe sent Baggies fans into raptures with an excellent flicked header that lifted his side out of the relegation zone into 17th spot.

It was West Brom's only attempt on target in the entire match - yet it was enough to provide another twist in the race for the title.

"The players worked hard and were strong.

"We have now drawn 1-1 against Everton, Liverpool and Chelsea.

"Now we need to win our next game, the players need to win matches. West Brom next season will be in the Premier League."