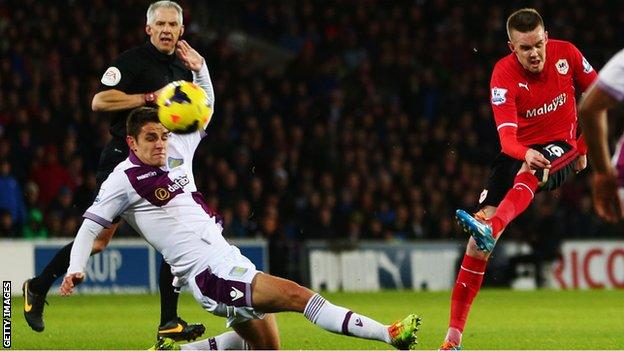 The Scotland international pulled off an extraordinary last-minute save from Andreas Weimann to earn his relegation-threatened team a point.

Cardiff striker Fraizer Campbell and Craig Noone both hit the woodwork during the same first-half attack.

But neither team could break the deadlock, with Villa frustrated by Marshall's heroics.

His save from Weimann followed another superb stop when Fabian Delph's 20-yard shot was deflected off Steven Caulker.

A point is enough to take Aston Villa above Swansea into 11th place, while Cardiff remain in the bottom three.

Neither team posed a major threat in front of goal for much of the match, in spite of Ole Gunnar Solskjaer's decision to start with Kenwyne Jones and Campbell as a twin strike force.

With Wilfried Zaha on the left flank and Noone on the right, Cardiff posed the bigger threat in the first half, with Campbell denied by a combination of goalkeeper Brad Guzan and a post after latching onto a Zaha pass.

Seconds later, the American was helpless as Noone's deflected shot from 20 yards looped onto the crossbar.

Apart from a penalty appeal for a foul on Jones by Nathan Baker, and Zaha's close-range strike being ruled out for a clear offside, there was little other incident during a first half in which Villa offered little.

However, Villa dominated after the break, with Christian Benteke and Gabriel Agbonlahor posing problems but running into an immovable object in the shape of man-of-the-match Ben Turner at the heart of the home defence.

The visitors should have taken the lead when Agbonlahor hesitated over a good chance and was dispossessed by Kevin Theophile-Catherine.

And when Villa did let get a shot away they found Marshall in the kind of form which has made him the Bluebirds' most valuable player this season.

The Scot flung himself high to his left to somehow tip Weimann's close-range shot over the bar, injuring himself in the process.

Manager Solskjaer said the save earned his side a point. The question is whether that alone is enough at a crucial stage of the season.

For his part, Villa boss Lambert was happy to see his team pick up their 17th league point away from home.

"I am frustrated. I thought in the second half we had enough chances to win it and David Marshall, who I knew up at Celtic, has kept them in it, he has made two world class saves.

"But Cardiff have beaten some really good teams here. Ole Gunnar Solskjaer has a good side after taking over from Malky Mackay and it is a hard place to come, although I still think we should have won the game."