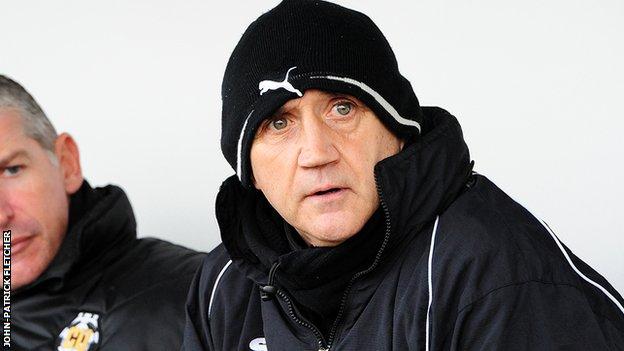 Cambridge United boss Richard Money has questioned the logic in his side playing Kidderminster Harriers twice in the second half of the season.

The Conference Premier teams meet on Thursday and again on 1 March.

"I wouldn't call it a quirk. It's something that can only happen in this league," Money told BBC Radio Cambridgeshire.

A year in the making

When Kidderminster and Cambridge face each other on Thursday, it will have been almost 12 months since they last met in a 3-2 win for Harriers on 9 February

"There is an element where it isn't fair. Peoples' teams change so much in the second half of the season."

He added: "Someone who is very strong in the first half can suddenly become a totally different team in the second half."

The second-placed U's will also meet Dartford twice in the latter half of the campaign, having played out a 3-3 draw last week before the reverse fixture on 15 March.

Thursday's trip to Aggborough is crucial for both sides, with Cambridge able to pull level on points with leaders Luton with a victory, while a Harriers success would put them into the play-off spots.

"It surely can't be that difficult to play everybody once in the first half of the season and once in the second half," said Money.

"We're not alone. Everyone else is in the same situation. I really don't understand why that is."