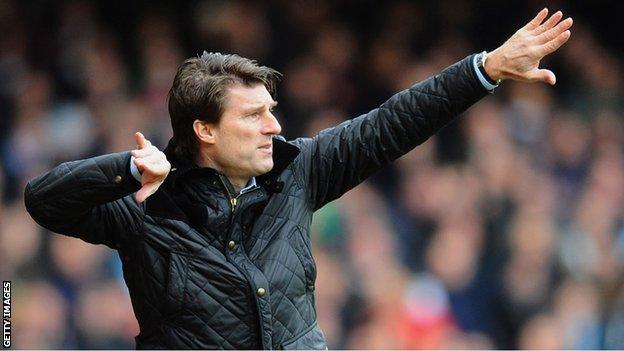 Former captain Gary Monk is poised to take up a coaching post, along with recently appointed academy consultant Pep Clotet.

Manager Laudrup returns to the club on Tuesday having been in Paris for two days since his team's 2-0 defeat against West Ham.

Swansea are 12th in the Premier League, three points ahead of Cardiff City whom they face at home Saturday.

The move casts doubt over the future of Laudrup's current backroom team - including Erik Larsen, Morten Wieghorst and Oscar Garcia.

The fact that it has taken place while Laudrup was away from the club will also fuel speculation about the Dane's future.

Bookmakers have shortened the odds against his departure with the Swans slipping in the table after one win in 10 Premier League games.

However, club chairman Huw Jenkins has rejected reports that Laudrup's position is under discussion.

"I haven't heard anything in reference to Michael and neither have we met, or discussed, or done anything about Michael," said Jenkins.

"A couple of us did actually meet up on Sunday morning to have a cup of coffee like we normally do. That's as simple as it was. That's where the first rumour came from.

"It's difficult for me to say anything because there isn't anything to discuss."