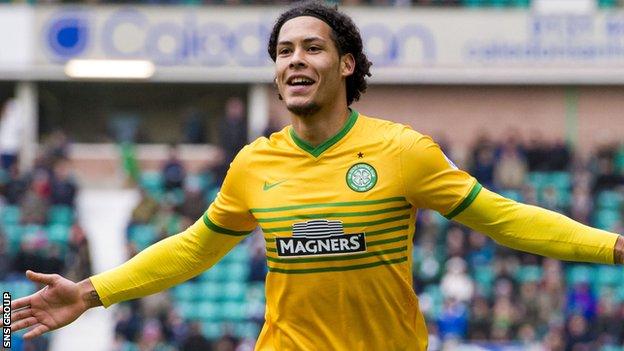 Virgil van Dijk admits there are people in his native Netherlands who think he is playing at a standard below him.

But the defender is proud of Celtic's unbeaten run in the league and a club record of 11 clean sheets.

Asked if his countrymen thought Scottish football was too easy, he replied: "Some of them, yes.

"But you still have to do it. It's not easy to be unbeaten for all the games we have played. And breaking a clean-sheet record is not easy."

Celtic lead the Premiership by 21 points after 24 games without defeat.

And Van Dijk has been hugely impressive in his debut season following a summer switch from Groningen.

But the 22-year-old has yet to be called up by the national side, with the Netherlands in a tough World Cup group alongside Spain, Chile and Australia.

While playing for Manchester United, Edwin van der Sar went 1,311 minutes without conceding a league goal and Van Dijk has an eye on surpassing that record.

Celtic's Fraser Forster has not picked the ball out of his net on league duty for 1,035 minutes and will need to go another two hours to beat the Scottish-best set by Aberdeen's Bobby Clark in 1971.

"The back four and Fraser are doing a good job and the whole team should be proud of the record we've set," added Van Dijk.

"The (British) record is for a Dutch goalkeeper so for me it should be something special. It's always good to break records and hopefully we can do it."

The defender, who has scored four goals in 31 appearances this season, described Forster as a "phenomenal goalkeeper - maybe one of the best in the world".

Celtic meet Aberdeen in the Scottish Cup on Saturday, with the Dons the last domestic team to score against the trophy holders.

"They are winning games but we are in a good flow as well."