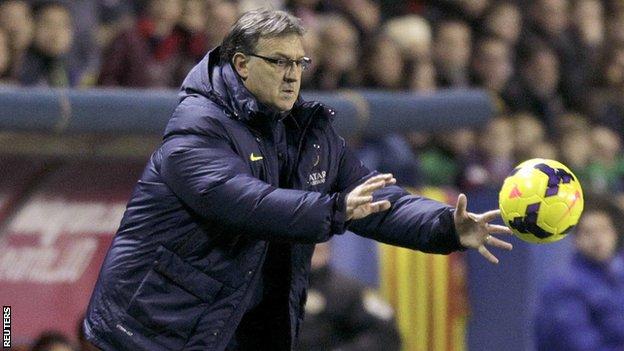 Barcelona hope to put their La Liga difficulties to one side in the Copa del Rey semi-final first-leg against Real Sociedad on Wednesday.

They lost 3-2 to Valencia on Saturday - their first defeat in two months - as Atletico Madrid went top of the league following their 4-0 win over Sociedad.

"It is true that crises always have a beginning so it is up to us to cut it short," coach Gerardo Martino said.

"We have it within our power to ensure this does not go any further."

Brazil forward Neymar returned to training on Monday for the first time since injuring his ankle last month, but is still not expected to play for another two weeks.

The Spain international, 24, was dismissed for two yellow cards against his former club.

Real Sociedad, who are currently sixth in the Spanish top-flight, have lost their last 16 games against Barcelona at the Nou Camp.

It has been a January to forget for the La Liga champions, with the Neymar transfer under investigation by a Spanish court and the resignation of Sandro Rosell as club president.

But Martino believes the title race is still wide open.

"Forty-five minutes of bad play is not enough to rule out Barca," he said. "I think ruling us out would be hasty."