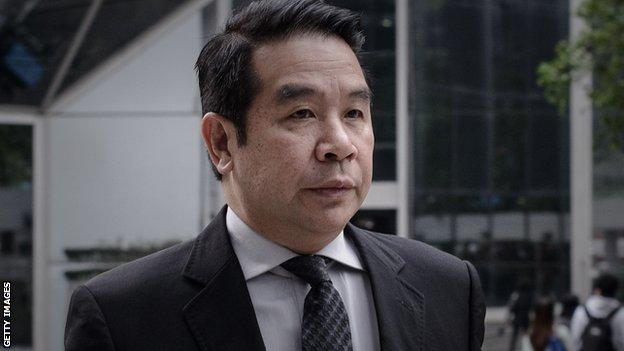 Birmingham City owner Carson Yeung has resigned from his positions on the boards related to the club.

He is awaiting the verdict of a money laundering trial in Hong Kong, an offence he denies, due on 28 February.

"Carson Yeung has taken this decision to focus more time on his ongoing court case and to satisfy one of the requirements for the resumption of trading of BIHL shares," said Blues' acting chairman, Peter Pannu.

"I will endeavour to update supporters further following the forthcoming EGM in Hong Kong.

"I would like to take this opportunity to thank Carson Yeung for his vision, dedication and generous support for the football club."

This latest announcement on Hong Kong businessman Yeung's future was initially made in a statement to the Hong Kong stock exchange, before Wednesday's BIHL EGM, which also outlined two new appointments.

Yeung has been succeeded as BIHL chairman by Cheung Shing, another of the company's executive directors.

Ma Shui Cheong, who has been appointed vice-chairman of BIHL, was given a place on the board at St Andrew's on Monday along with Greek finance specialist Panos Pavlakis, joining Pannu and Yeung's son Ryan and Pannu.

BIHL expressed its gratitude to its former chairman in a prepared statement, which said: "Mr Yeung, with his foresight, aspiration and clairvoyance, has steered the board successfully through landmark projects such as the acquisition of Birmingham City Football Club, for which the board is profoundly indebted.

"Mr Yeung unequivocally confirms that he has no disagreement with the board and that there are no other matters relating to his resignation that are required to be brought to the attention of the shareholders of the company."

Birmingham, relegated from the Premier League in 2011, currently stand 18th in the Championship, six points clear of the relegation zone ahead of Saturday's game at 22nd-placed Charlton Athletic.