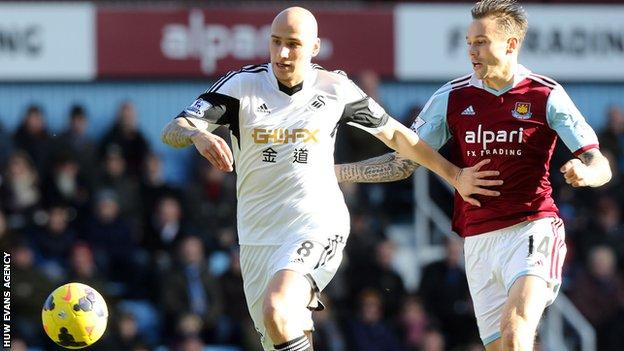 Swansea City midfielder Jonjo Shelvey could be out of Saturday's Premier League derby against Cardiff City.

Shelvey, 21, was replaced after 70 minutes of the Swans' defeat at West Ham on Saturday after hurting his hamstring.

The extent of his injury is unknown.

Since joining the Swans for an initial £5m from Liverpool in July, Shelvey has scored four goals in 31 appearances in all competitions.

The Swans have struggled recently winning just one of their last 10 games in the top flight.

Swansea are 12th in the Premier League two points above the relegation zone and just three ahead of bitter rivals Cardiff who visit the Liberty Stadium on Saturday.