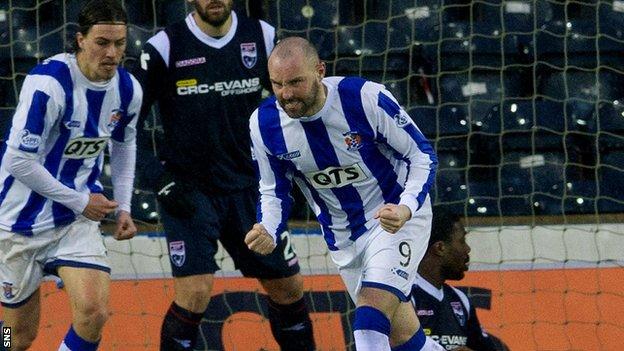 A couple of months into the season it looked as if Allan Johnston might be an early winner of the Scottish Premiership's managerial sack race.

His Kilmarnock team had gone 10 games without a win and been knocked out of the Scottish League Cup at home to Hamilton.

Magic is 40-year-old Johnston's nickname from his playing days and it seemed as if a wave of the wand would be needed to prolong his job prospects.

That was the view from the outside. Inside Rugby Park, there was nothing approaching panic.

Instead, a realisation that there were lots of valid reasons to explain Killie's stuttering start to the campaign.

A new and young manager for one thing. For all Johnston's success at Queen of the South with the experience of Sandy Clark by his side - they skated to the Second Division title and won the Challenge Cup - this was always going to be a completely different challenge.

That was one big question to be answered as Kilmarnock entered a period of transition. Then there were the constant rumblings about the running of the club, its financial position and the possibility of a takeover.

What Johnston and Clark didn't need on top of everything else was to kick off the season without two key players, the experienced pair Manuel Pascali and Sammy Clingan.

Going two months without a win maybe isn't so surprising, on reflection, when you think that those two are now a big part of the backbone of the team.

Allan Johnston will already have learned a lot and, if he can keep Kilmarnock in a safe place and kick on next season, it could be the making of him as a manager

Skipper Pascali in the centre of defence with keeper Craig Samson behind him. Clingan the main man in midfield and that crucial thread through the middle of the side completed by up front.

Around about those four it's all about youthful promise or total inexperience, depending how you look at it.

As is the case at lots of other Premiership clubs, youngsters are getting the chance to play in the first team and that's got to be good.

Nineteen-year-old winger Chris Johnston is an exciting talent. Midfielder Craig Slater is the same age and he too is racking up top team experience.

There are two 20-year-olds in the team. Wide man Rory McKenzie has played a good number of games now. Lee Ashcroft is learning alongside Pascali at the back.

Maybe the most exciting prospects at Killie are both 17. Greg Kiltie has been used sparingly so far. The potential of Robbie Muirhead is already there for all to see.

So the future looks bright for Kilmarnock but it's the here and now which concerns quiet-spoken gaffer Johnston.

And their recent results revival boosts the prospects of Killie avoiding the end of season relegation play-off.

At the end of November they were second bottom with only nine points on the board. They've added another 17 since then and, of the four teams clustered above Hearts in the Premiership, they're currently best placed.

All of their wins bar one have come against teams around them and if they can keep that up they can steer clear of a nerve-jangling end to the season.

Keeping Boyd and are two other big reasons to be backing Killie's survival mission.

This was always going to be a tough season for them and that's the way it's panned out.

Allan Johnston will already have learned a lot and, if he can keep Kilmarnock in a safe place and kick on next season, it could be the making of him as a manager.