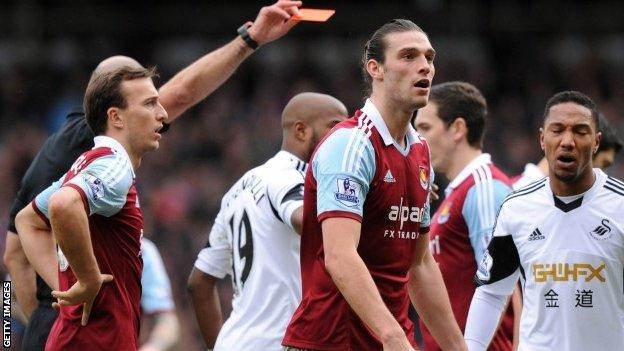 West Ham are to take legal action after failing in their appeal to overturn the red card shown to Andy Carroll during the 1 February win against Swansea.

The Football Association upheld the decision which means the England striker is now banned for three games.

"There is nowhere to go other than to seek some kind of legal redress," said West Ham co-chairman David Gold.

Rules allow clubs to take disputes to arbitration and if necessary to the Court of Arbitration for Sport.

In the 12 months from the start of March 2013 to the end of February 2014, Andy Carroll will have played only 15 games, scoring four goals (if the club do not overturn the ban).

The FA has refused to comment on the latest development.

Carroll, 25, was sent off after clashing with Swans defender Chico Flores during his side's 2-0 victory.

He will now miss the Premier League games against Aston Villa, Norwich and Southampton.

In apparent reaction to the decision, Carroll, who set up both goals tweeted: "Disgraceful."

According to the FA, West Ham failed to prove to a three-man panel that referee Howard Webb had made "an obvious error" in dismissing Carroll after the forward's arm hit Flores's forehead.

However, West Ham manager Sam Allardyce was certain that Webb made a mistake.

"There has to be somebody to look at that in the cold light of day and say that is certainly not a red card," he said after the win.

Gold added: "We are hugely disappointed at the outcome of the process.

"The last thing I want to do is going to some kind of legal issue because I think it is a footballing issue.

"We are upset, we feel we have been badly treated.

"Most judgements are not made by three people, they are made by 12 - that's why they are called juries.

"I believe if you had gone to the FA Council and asked the 100 members 75% would have said it was not a sending off, but if you just take three people it may not be representative."

West Ham are 18th in the Premier League, one point from safety.