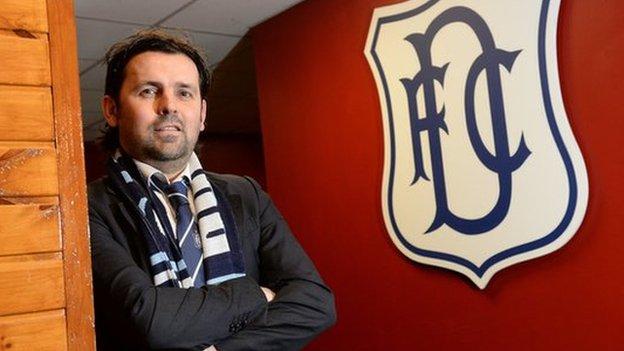 Dundee have appointed Paul Hartley as their new manager.

The 37-year-old replaces John Brown, who after a turbulent year in which his side were relegated from the top flight.

at Alloa Athletic last month and will take charge of Dundee for the first time against Hamilton on Saturday.

The Dark Blues, who are level on points with Championship leaders Falkirk, are a point ahead of Hamilton.

After a playing career that included spells at Hibernian, Hearts and Celtic, as well as 25 Scotland appearances, Hartley moved into management with Alloa in 2011.

He led the Wasps to successive promotions but left midway through the current Championship campaign,

Keen to take charge of a squad of full-time players, Hartley was considered for the Inverness job but was overlooked in favour of John Hughes.

Dundee and Hamilton vied for top spot in Scotland's second tier throughout the early part of the season but Falkirk's recent form has propelled them to table's summit.

The eventual winners of the title will gain promotion to the Premiership while the teams finishing in second, third and fourth will enter a promotion play-off system that will culminate in a two-legged final against the team finishing second bottom in the top tier.

In a statement, Dundee said they were "delighted" with the appointment of Hartley.

"He comes to the club with a successful past in both playing and managing in this country," it read.

"As a player, Paul won all the top prizes in the Scottish game as well as representing his country.

"In management, he already has two promotions to his name after only two-and-a-half years in the hot seat."

And chairman Bill Colvin told the club website: "It is a great tribute to the work we are doing at Dens Park that one of the most sought after young managers in Scotland has pledged his immediate future to us and we look forward to see him apply his talents to our squad."