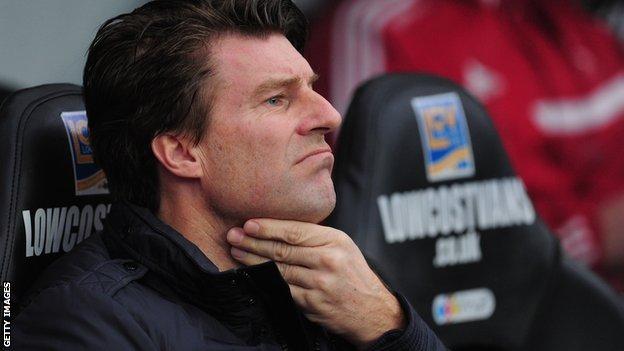 The club face Cardiff in the Premier League on Saturday, with just three points separating the Swans in 12th and the Bluebirds in 19th.

Hand on heart, this hasn't surprised me at all... I think it's been coming

Club captain Garry Monk is in charge for the "foreseeable future", a decision Roberts considers a risk.

"He won't be able to bring new faces in," he said. "The timing is bizarre, to do it leading up to the derby."

Roberts, a BBC Radio Wales football pundit, added that news of Laudrup's departure had not come as a total shock.

"There are a few things that do surprise you in this game," said the former Norwich City frontman. "Hand on heart, this hasn't surprised me at all. I think it's been coming."

Rumours had been circulating about Laudrup's position since the Swans lost 2-0 at West Ham on Saturday.

It was their sixth defeat in eight Premier League games, leaving them only two points above the relegation places.

Monk had been tipped to join the club's backroom staff as part of a mooted reshuffle of the coaching set-up, but instead finds himself in the role of head coach.

Swansea legend Alan Curtis, already part of the coaching team at the Liberty Stadium, will assist Monk as they seek revenge over the Bluebirds for their 1-0 Premier League defeat in November.

Laudrup succeeded current Liverpool manager Brendan Rodgers in June 2012 and went on to lead the Swans to their first major trophy with victory in the 2013 Capital One Cup final.

That success earned them a place in this season's Europa League, a campaign that produced a memorable 3-0 victory at Spanish top-flight side Valencia in September.

They face Napoli in the last 32 of the competition this month.

Despite their poor league form, Laudrup guided the club to a first win at Old Trafford as they knocked Manchester United out of the FA Cup.

Former Wales and Swansea striker Ian Walsh said there had been signs recently that all was not well at the Liberty Stadium.

"It's a very surprising decision but obviously there's a lot more going on behind the scenes than meets the eye," said Walsh.

"Yes, there are a couple of things behind the scenes, but that can happen at all clubs," added Walsh.

He said Laudrup's body language "hasn't been great over the last couple of months" but said the 49-year-old Dane should be praised for guiding the Swans to their first major trophy.