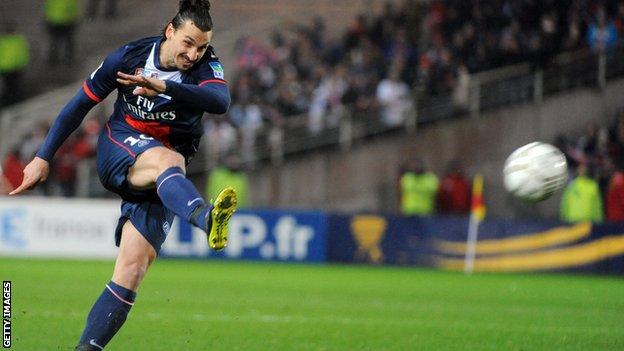 The Sweden striker capitalised on an error by goalkeeper Remy Rio to open the scoring in the fifth minute with a shot on the half-volley.

But Ibrahimovic secured PSG's passage when he headed home Lucas Moura's cross in the final minute.

PSG will play the winner of Wednesday's semi-final between seven-time French Ligue 1 champions Lyon and second division Troyes on 19 April.

It also keeps alive PSG's hopes of claiming a domestic double. They are five points clear of second-place Monaco in Ligue 1.

"It was a real cup tie, the script is often like that," said PSG coach Laurent Blanc.

"In the second half Nantes applied more pressure, were more involved, created some chances and equalised - but in the last 10 minutes my team stepped up a gear.

"We're in the final, that's what we were looking for and we've done it."