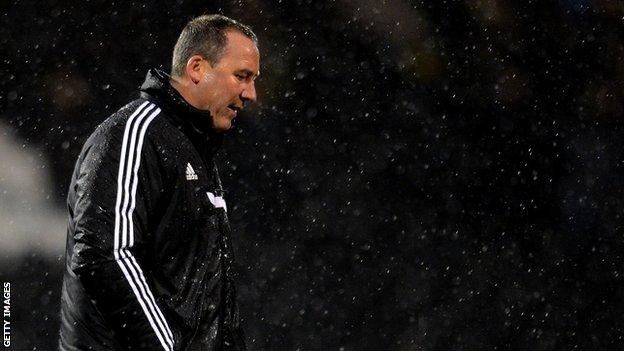 Fulham head coach Rene Meulensteen has urged his players to "dig" the Cottagers out of trouble after admitting they have hit "rock bottom".

His club sit at the foot of the Premier League and are out of the FA Cup after a shock defeat by Sheffield United.

"We know we only have ourselves to blame," said Meulensteen. "We need to look in each other's eyes and dig ourselves out of it."

The Dutchman added: "Have we hit rock bottom? We probably have."

After a 1-1 draw at Bramall Lane, Fulham were beaten 1-0 in a dour fourth-round replay thanks to Shaun Miller's last-minute header in extra time.

"We could have played until next month and not scored a goal," added Meulensteen.

"The knocks we have picked up over the last couple of weeks have definitely had an influence on the confidence. When it happens, that is when you need to stick together."

Sheffield United boss Nigel Clough hailed the attitude of his players after defeating top-flight opposition in the competition for a second time, following their earlier triumph against Aston Villa.

"If you hang on in there at 0-0, you've always got that opportunity," said Clough, adding it was "a remarkable effort again" by his players.

The League One strugglers will now host either Preston or Nottingham Forest in the fifth round on Saturday, 15 February.

Preston and Forest play their fourth-round replay on Wednesday.