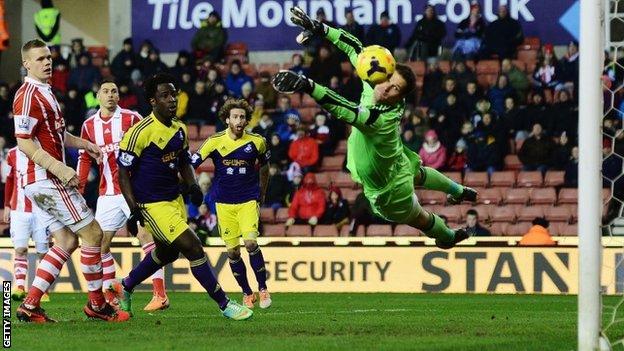 Relegation rivals Stoke and Swansea each moved another point away from the relegation zone after playing out a draw at a windy Britannia Stadium.

The game was in doubt at one stage because of the weather, and kick-off was delayed by 15 minutes.

Stoke led at the break when Peter Crouch fired home after Peter Odemwingie had hit the base of a post.

But the Swans saved a point in the second half as Chico Flores headed in Pablo Hernandez's cross.

Swansea are now four points above the bottom three, with Stoke a point below them.

It was doubtful the game was going to be played at all at 18:20 GMT, when the ball would not remain still during referee Jonathan Moss's stadium inspection. However a local weather forecast indicated the wind would die down, with the game given a new 20:00 GMT kick-off time.

The conditions were still windier than either team would have hoped for, but Stoke adapted better and took the lead.

Crouch played the ball to Odemwingie, who struck a post, and the ball fell kindly for the England striker, whose deflected shot from 16 yards crept past a host of defenders and in.

Swansea, as usual, were dominating possession but the Potters had the better chances. Marko Arnautovic forced a save with a swerving effort from 25 yards and Jon Walters fired a shot at Michel Vorm's chest.

As the game drifted towards half-time, the difficult conditions were showcased when Asmir Begovic struggled to place the ball for a goal-kick because of the wind.

Swansea's passing had more precision after the break and Wilfried Bony blazed a shot high and wide with Nathan Dyer furious he had not played him in on the right.

The equaliser came when Crouch headed Hernandez's corner straight back to the Spaniard, who crossed for Flores to flick a header past Begovic.

Stoke brought on striker John Guidetti for midfielder Glenn Whelan with 20 minutes to go as they chased a winner.

But it was Swansea who had the best opportunities to win the game. Bony went close when his shot from eight yards was saved by Begovic and then cleared off the line by Ryan Shawcross.

Substitute Jonathan De Guzman then forced a great diving save from the Bosnian goalkeeper with a shot from 25 yards.

There was almost a late twist when Stoke appealed for a penalty after Crouch went down under pressure from Flores, but referee Moss was not interested.

"We didn't play particularly well but we got ahead in the game. As the home team, you want to be able to manage the game and get through and make sure you don't concede. The goal we conceded was a poor one. Swansea played like they do, plenty of possession.

"We are a little bit disappointed the referee didn't give us a couple of penalties. Whether we deserved maximum points, I think people would debate that.

"Today wasn't a good performance but we got something out of the game. Maybe a couple of weeks ago we wouldn't have been able to."

"I think a point is a good result. We could have won that game. In the second half we were magnificent.

"Everyone gave a massive effort, I couldn't be happier with them. You want to win, let's not come and try to settle for anything.

"We knew what type of game we'd be in for here. It was a bit of a swirl, one minute the wind was going one way and the next it was going another way.

"Chico Flores was a warrior today, he showed what a good player he is. He was man of the match by a million miles."