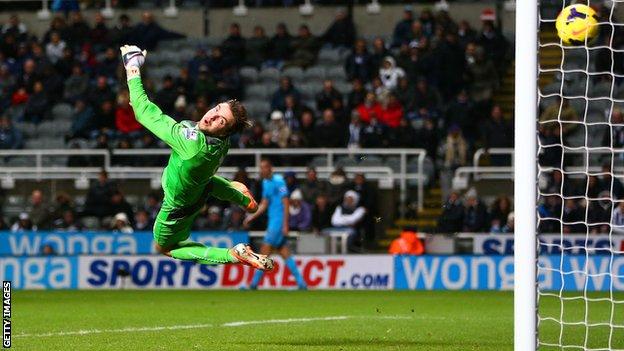 Emmanuel Adebayor scored twice as Tottenham maintained their challenge for a top-four finish with victory over a Newcastle side short of confidence.

Adebayor put Spurs ahead when he tapped in after Tim Krul had palmed Nabil Bentaleb's cross into his path.

Adebayor was involved in the second, when Krul dived low to stop his shot only for Paulinho to follow up, before grabbing his second with a volley.

Nacer Chadli rounded off the scoring with a brilliant 20-yard curling shot.

The Magpies were barely a threat in the first half before improving marginally after the break, with Spurs keeper Hugo Lloris denying Papiss Cisse, Mathieu Debuchy and Yoan Gouffran with good saves.

But they failed to score for the seventh time in their past eight Premier League matches as they fell to a fourth straight league defeat at St James' Park for the first time since 1987.

Some will cite the departure of Yohan Cabaye and striker Loic Remy's suspension for the run of form that has seen them slip to ninth, but many of the side they fielded on Wednesday had helped them into sixth on Boxing Day.

Spurs, meanwhile, have had an excellent two months and moved to within seven points of leaders Chelsea with this victory.

Since Tim Sherwood took charge in late December, the north London side have won seven and lost just one of their 10 league games, taking 23 points from a possible 30.

Adebayor, left in the cold by previous manager Andre Villas-Boas, has flourished under Sherwood.

He opened the scoring here with his seventh league goal in 11 games, tucking in after Krul failed to adequately deal with Bentaleb's 19th-minute cross.

The Dutch keeper was punished again after the break, when his parry from Adebayor's low drive fell to Paulinho, who slotted in.

Newcastle tested Lloris only once in the first half, Cisse's header forcing him into action, but the Frenchman was tested more after the break, denying Cisse again, Debuchy and Gouffran. One slip, and the Magpies would have been back in the game.

Instead, Tottenham doubled their margin of victory with two late goals.

Adebayor's second came from a volley into the ground that bounced over the desperate reach of Krul, before Chadli scored his first league goal for the club with a marvellous strike from the edge of the area.

"I was more upset about the performance. That wasn't an honest display from us. I mentioned a few things in the dressing room that I hope hits home - I won't mention them to the media.

"Tottenham dominated proceedings from the start to the finish. They won with a bit to spare - that shouldn't happen at St James' Park regardless of who I have and don't have available. We lacked confidence.

"We need a break in front of goal. Their keeper made two or three outstanding saves. The overall performance is a concern, it's not the result or the fact we haven't scored."

"I'm a perfectionist. There was a spell at start of the second half when Hugo [Lloris] had to pull off some saves.

"The boys looked sharp from the start. We've got to keep on the tail of Liverpool. They are relentless. I hope they keep on checking over their shoulders and see Spurs are still there."