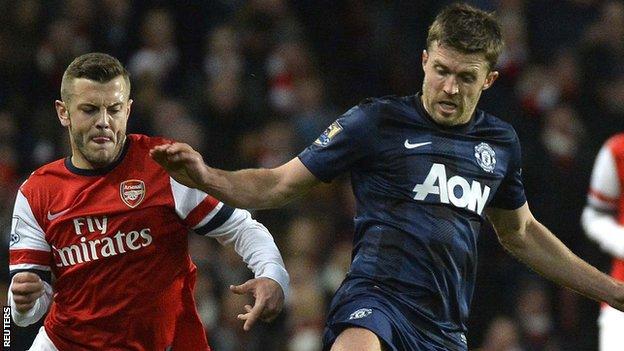 Arsenal missed the chance to return to the top of the Premier League as they played out a grim goalless stalemate with Manchester United at Emirates Stadium.

The Gunners were attempting to recover from the 5-1 mauling at Liverpool, while United were desperate to bounce back from the 2-2 draw at home to bottom club Fulham.

And it showed in a game that was desperately disappointing in between a flurry of chances in the opening and closing minutes, ending in a result that did not serve the purposes of Arsenal manager Arsene Wenger or United counterpart David Moyes, other than in avoiding defeat.

Former Arsenal striker Robin van Persie came closest for the visitors but his early effort was saved by Wojciech Szczesny, who also turned the Dutchman's late header onto the bar.

For too long, however, this was a poor game between two sides who seemed intent on avoiding defeat as their first priority - and a shadow of previous games between these two clubs in recent years.

Moyes is still waiting for his first win at Arsenal in his managerial career, while the home side could not land a morale-boosting blow in their pursuit of the title as they remained a point adrift of leaders Chelsea.

The excitement of the opening moments and an exchange of chances proved to be a false dawn ahead of a turgid first half.

Van Persie should have punished his former club when he robbed Mikel Arteta 25 yards out to advance on Szczesny but his shot lacked power and the keeper was able to save low down.

Giroud then wasted an equally good opportunity when he muscled his way ahead of Nemanja Vidic only to head Cazorla's corner wide.

De Gea then needed to make a diving stop as Tomas Rosicky's shot deflected off Vidic - but otherwise this was stale fare from two teams who have produced so much better.

Moyes made an enforced change at the start of the second half as he sent on Rio Ferdinand for Rafael, who had taken a blow to the head in an aerial challenge with Giroud.

It was Arsenal who came closest again just after the hour when Koscielny rose to meet another Cazorla corner only to see his header swept off the line by Valencia.

As the game entered its final 20 minutes both Wenger and Moyes attempted to give their sides fresh impetus as Alex Oxlade-Chamberlain replaced Rosicky and Adnan Januzaj replaced the subdued Juan Mata.

There had been little sign of any partnership between Rooney and Van Persie but the pair linked superbly as United almost went ahead with 11 minutes left. Rooney's cross found Van Persie at the far post but Szczesny reacted superbly to push his header on to the bar.

Arsenal responded as the game finally showed signs of life, De Gea doing well to save from Cazorla on two separate occasions in the closing minutes, but there was no breakthrough.

"Overall, we could have won it - it was a game of few chances. Our defensive focus was extreme as we conceded so many goals on Saturday.

"In the end, either side could have won 1-0. Manchester United are a good team, so when you go forward they can catch you.

"It is important to recover physically and prepare for the next game as we want to stay in the FA Cup. The title race is absolutely open for many teams."