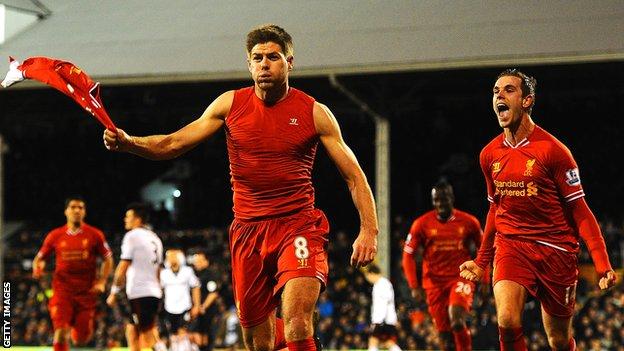 Steven Gerrard scored a last-gasp penalty as Liverpool moved to within four points of the Premier League summit after a dramatic win at Fulham.

But Philippe Coutinho equalised from 20 yards before Gerrard's penalty.

The spot-kick was awarded by referee Phil Dowd after Sascha Riether's clumsy stoppage-time challenge on Sturridge.

Gerrard's calm conversion gave Liverpool a fifth league win of the calendar year and ensures they remain in the mix for the title after an unbeaten start to 2014.

Yet this was anything but easy for the Reds as Fulham twice took the lead before crumbling in the closing stages.

In a reversal of Saturday's 5-1 victory over Arsenal, in which they were 2-0 up in the opening 10 minutes, Liverpool found themselves behind for the first time in an away match this year after Toure's early error.

Toure's chaotic start to the match continued moments later when he flattened referee Dowd by running into him.

Fulham's previous two home league games had ended in 3-0 and 4-1 defeats at the hands of Southampton and Sunderland respectively.

But the Cottagers, thanks to the infectious enthusiasm of midfielder Lewis Holtby, carried on from where they left off in their 2-2 draw against Manchester United on Sunday as they rattled their opponents.

Even before Toure's calamitous mistake, midfielder Ryan Tunnicliffe had gone close after catching Liverpool's defence napping in the opening minute.

Indeed, in the opening half, Brendan Rodgers's side were a shadow of the one that had destroyed the Gunners a few days earlier. Even captain Gerrard was guilty of gifting the hosts possession.

With the Reds struggling to find any sort of rhythm, Darren Bent, back in Fulham's starting line-up following his last-gasp heroics at Old Trafford, spurned a glorious chance to double the lead from Richardson's tempting 32nd-minute cross.

And nine minutes later the Reds were level. Gerrard's delightful pass with the outside of his right boot sliced the home defence wide open and Sturridge kept his composure to score in off the post.

In an entertaining game, Luis Suarez was denied by the woodwork moments before Richardson put the hosts back in front from close range after a poor attempted clearance from Skrtel in the 63rd minute.

However, Fulham conceded their 57th top-flight goal of the season when Coutinho drilled home from just outside the area.

Soon after Fulham lost keeper Maarten Stekelenburg to injury before Gerrard's late heroics left Liverpool's travelling support in raptures - and their hosts another match closer to the Championship.

"I definitely think we deserved a point We actually played quite well, were well organised, we didn't let them settle into a rhythm.

"Out of a nothing ball, Gerrard made a pass with the quality he's got and they stuck it in the net so you have to start again.

"The penalty was just a silly challenge that should not have been made by Sascha.

"The first thing he admitted when he walked in the dressing room was: 'Sorry, I shouldn't have done it'."