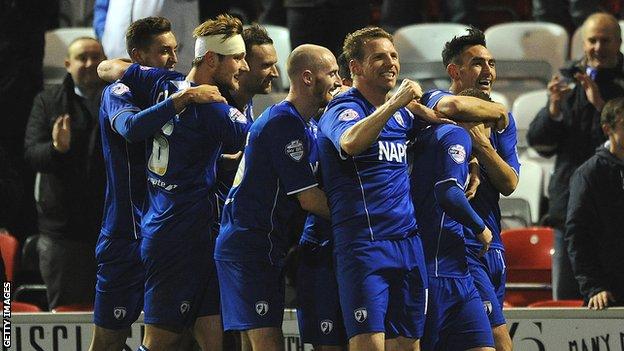 Chesterfield manager Paul Cook says his side are taking nothing for granted, despite being favourites to reach the Johnstone's Paint Trophy final.

in the first leg of the northern area final at Highbury on Tuesday.

"It's a good lead, but it is certainly not an unassailable lead," Cook told BBC Radio Sheffield.

Fleetwood manager Graham Alexander told BBC Radio Lancashire: "I still don't think the tie is over by any stretch."

David Ball replied just before half-time, but Jimmy Ryan's sweetly-struck shot restored the two-goal advantage and put Cook's men on the brink of a second Wembley final in three years on 30 March.

"We rode our luck for long spells and Fleetwood are a very good side," added the former Accrington boss.

"The next goal in the tie is huge and there is one thing for sure - they will not come to the Proact Stadium and just lie down."

Fleetwood had two goals disallowed in the first period, the second for offside against Jon Parkin with the score at 2-0.

Referee David Coote initially awarded a goal, only to rule that Parkin had diverted a Mark Roberts shot into the net following a consultation with his assistant.

"He said Parkin got a touch on it in the centre of the goal," said Alexander.

"I didn't think he [the referee] was in control of the game from minute one. But these are things that sometimes go against you, and you can't blame the referee for the goals we conceded."