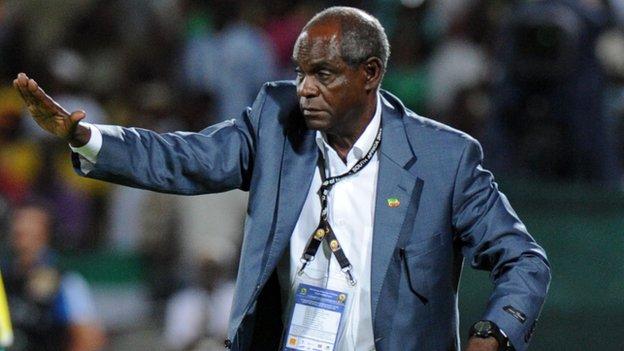 The Ethiopia Football Federation has sacked head coach Sewnet Bishaw after a disastrous performance at the recent African Nations Championship in South Africa.

Ethiopia lost all three of their group games at the tournament for locally-based players and failed to score a single goal.

"Sewnet is a hero for our football; he brought us back to the international scene, we recognise his success in the last two years but things must continue to grow," he said.

Bishaw led Ethiopia to a first Africa Cup of Nations in 31 years when they qualified for the finals in South Africa last year.

Under his guidance the team also did well in the 2014 World Cup qualifiers as they reached the play-offs, losing 4-1 on aggregate to Nigeria for a place in Brazil.

But results in recent months have cost Bishaw his job.

"We lost both of the World Cup play-off mathces, we didn't do well at the regional Cecafa Cup and the CHAN results were less of our expectations, they don't fit a nation of 90 million people, " Basha added.

The EFF are yet to name a replacement for Bishaw but there is a chance they could look at hiring a foreign coach for the Walya Antelopes.

"We'll be looking for a good coach that can push us up to the next level and that could mean a foreign coach taking the post but local coaches are also being considered - what we need is some-one who can improve us," Basha insisted.