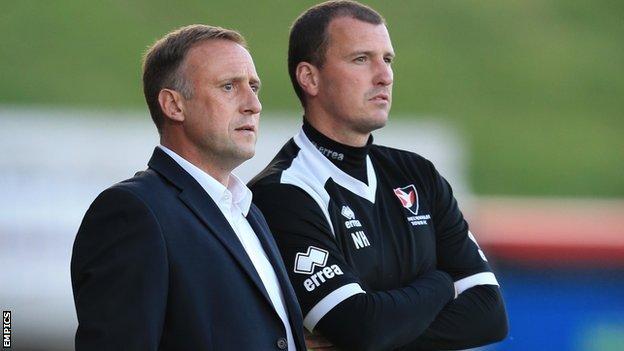 Manager Mark Yates' next contract at Cheltenham Town could be his last at the club, says chairman Paul Baker.

The 44-year-old is in his fifth season with the Robins, and is the third longest-serving manager in English football after Arsenal's Arsene Wenger and Exeter's Paul Tisdale.

Yates is currently in discussions over a new two-year deal which would keep him at Whaddon Road until 2016.

But Baker told BBC Gloucestershire: "I think it probably will be his last."

He continued: "He'll have been with us for six years and I think that may be time for Mark himself to be saying 'I need to move on'.

"Mark is a young manager. When he's done his UEFA 'B' licence he'll be one of the most highly-qualified football managers in the country. I'd be very surprised if he wasn't ambitious to move up to a League One or Championship club.

"But who knows? It really does depend on things like his personal situation. Lots of things come into it.

"If I was a betting man, which I'm not, I would think Mark wouldn't be with us at the end of this contract - if and when we get it signed."

Former midfielder Yates was Cheltenham captain when they won promotion from League Two via the play-offs in 2002.

He started his managerial career at Kidderminster Harriers in 2006, but quit the non-league club in 2009 to return to Cheltenham.

Yates, along with assistant Neil Howarth, has twice led the Robins to the League Two play-offs - they lost to Crewe in the 2012 final at Wembley and were beaten by Northampton at the semi-final stage last term.

However, Cheltenham have had what Baker described as an "ordinary" campaign this season. They are currently 14th in League Two, 12 points from the play-offs, and without a win in 2014.

Despite that, he said says he had no qualms about offering Yates and Howarth extended deals beyond the summer.

"I am very keen on stability and I don't believe in changing managers for the sake of it," Baker added.

"The reason we brought them to the club in the first place was because they love the club and came with a passion to turn it round - and turn it round they did.

"I think this season will be regarded as a blip, but hopefully we can turn that round and have a better season next year."