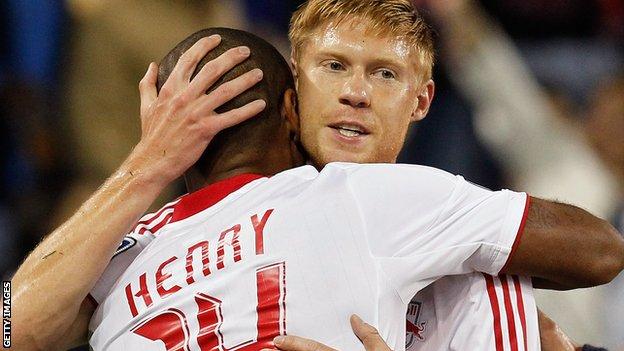 Wigan have signed defender Markus Holgersson, who was a free agent after leaving New York Red Bulls in January, on a deal to the end of the season.

The 28-year-old - capped once by Sweden - played 67 times in two seasons with the Major League Soccer side, playing alongside former Premier League stars Thierry Henry and Tim Cahill.

"Markus had a few options available to him," said Latics manager Uwe Rosler.

"We are delighted he has chosen to come to Wigan Athletic."

The German, who was appointed in December, continued: "He brings a wealth of experience, together with the versatility to play in a number of positions because of his good technical ability.

"The defence is an area where we needed strengthening and Markus will definitely help the squad moving forwards."

Former Helsingborgs defender Holgersson is the fifth addition made by Rosler since the turn of the year, joining Tyias Browning, Nicky Maynard, Josh McEachran and Martyn Waghorn at the DW Stadium.