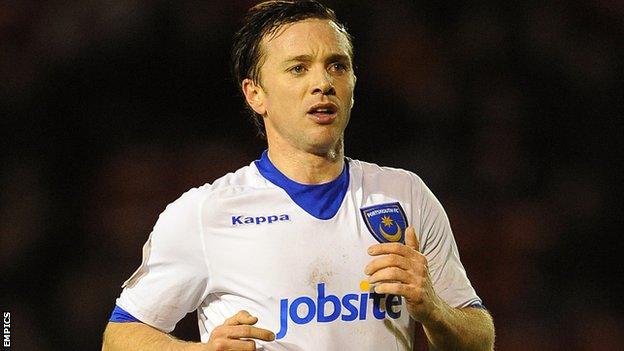 The 36-year-old joined from League Two rivals Portsmouth on transfer deadline day and has scored once in two appearances for the third-placed U's.

"The club have got a great set of lads here," Connolly told BBC Oxford.

"They are very bubbly, really good atmosphere, a lot of men who are treated like adults who are trusted to go and perform on the pitch."

Connolly, who has made 20 appearaces for Pompey this season was signed by then-boss Guy Whittingham in December 2012 and was given a two-year deal in May 2013.

The forward would not be drawn on his reasons for moving out on loan, but said he still had fond memories of the club and had not ruled out returning to Fratton Park.

I'm not one for shouting or telling people what to do and I'll be there to lend a hand, train well and offer any help I can

"It's a tricky one to answer," he said of his departure.

"I don't wish anyone any ill-will. Portsmouth is a really special club. I took my little boy to football in a Pompey kit.

"There are some fantastic people there, great set of fans and despite being an ex Southampton player they took me to their hearts. That is not always easy to do as an ex-Southampton player. I wish them all the best."

Having applied for the Pompey job when Whittingham was sacked, Connolly says he has no interest in the current vacant managerial position at the Kassam Stadium with caretakers Mickey Lewis and Andy Melville in temporary charge.

"I've come here to play," he said. "Portsmouth might want me back, I've got another year on my contract at Portsmouth and to be honest I'm in good shape, fit and have a bit of pace to nick a goal and think I could play for a few more years.

Connolly hopes he can help fire and inspire the U's to promotion with Oxford maintaining their push following Tuesday's 1-1 draw with Bury.

"Everything is geared up to promotion and the key thing here is the people in charge," he said." The chairman is in and about the place, Mickey and Andy are very positive and trust the lads. It will be hard because nothing comes easy in life.

"Hopefully you lead by example. I'm not one for shouting or telling people what to do and I'll be there to lend a hand, train well and offer any help I can.

"You need lots of things to make a successful team. You can't just have youth and legs, you need that real mix. You need pace, know how and quality and in this team we seem to have that mix."