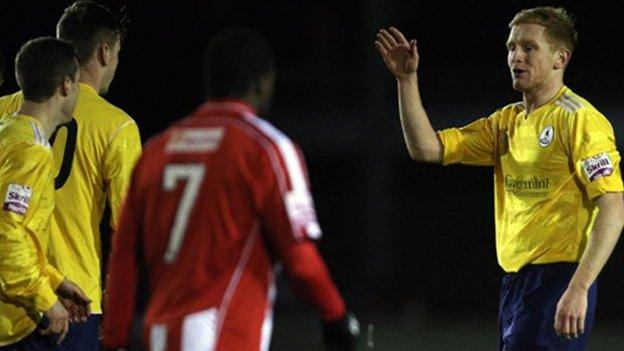 AFC Telford United manager Liam Watson classed his side's 1-1 draw at Altrincham as a "missed opportunity" as they failed to get back within a point of the Conference North top two.

Against the run of play, a mistake at the back by Dan Preston let in James Walshaw to equalise.

Half century for Telford

Altrincham took control in the second half, Walshaw firing wide before Gianluca Havern hit a post.

But Telford hung on in the end for the point which sees them slip to fourth in the table, Boston having now moved above them on goal difference after winning at Histon.

With Conference North leaders North Ferriby United having been absent on FA Trophy quarter-final duty on Saturday, Telford's 4-2 win at home to Guiseley had closed the gap back to within four points. But Telford now have to look to Saturday's trip to Oxford City to make further inroads.