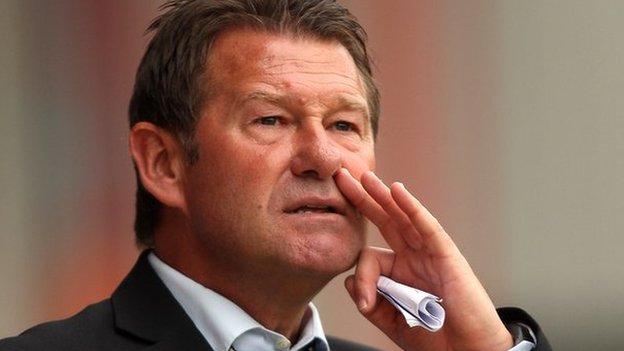 Jackson, whose team picked up their first point under him against League One leaders Brentford on Saturday, wants to see how Hutchings blends in.

At Preston, with Moyesie, we used to have three or four coaches that would come in and take a session

"You have the dynamic of working with him and the group. It has to be right."

He did that job at Bradford City, Wigan Athletic and Derby County before succeeding Jewell for short spells at the Bantams and the Latics.

Hutchings later spent two years as Walsall manager until being sacked in December 2010 and then linked up with Jewell again at Ipswich Town in January 2011.

He has already established a connection with Shropshire, having been brought in to assist Lee Ebden at Northern Premier League Division One South side Market Drayton Town last summer.

"I want to see how it works," Jackson told BBC Sport. "It's a big decision."

Jackson knows the importance of hearing a different voice in training from his days playing under Manchester United manager David Moyes at Preston North End.

"At Preston, with Moyesie, we used to have three or four coaches that would come in and take a session," he recalls. "It's something a bit different and sometimes there's nothing wrong with that."