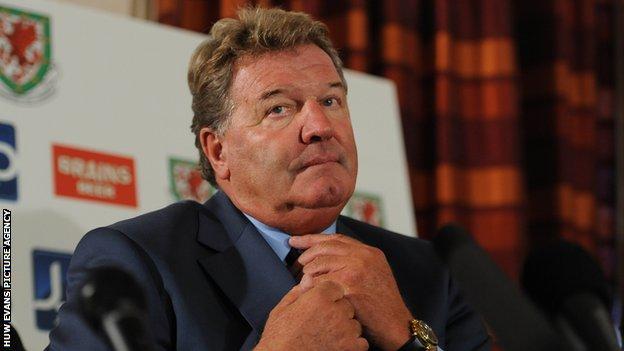 Former Wales manager John Toshack was surprised that Swansea City decided to sack boss Michael Laudrup in the week leading up to the south Wales derby.

Cardiff and Swansea meet at the Liberty Stadium on Saturday with both sides in relegation danger.

Toshack, 64, played for both sides and also managed Swansea during another successful period in their history.

"This really has come as a bit of a shock, particularly with this big game coming up on Saturday," Toshack said.

"This was no premeditation in this decision. Normally when these things happen people have got somebody ready to step in.

"We don't know really which way the Swans will react now at the weekend... from Swansea's point of view it's certainly not the ideal situation.

"Cardiff after their win last week and their bright performance, they're really up for it.

"For me to choose between Cardiff and Swansea is very difficult, I'd like to see them get a draw on Saturday and then both teams steer clear of relegation and be playing each other for many years to come in the Premier League.

"It's a very delicate moment for both of them."

Garry Monk has been appointed caretaker manager following Laudrup's departure and Toshack, speaking to the BBC's Sport Wales programme, is sure that the club captain and assistant Alan Curtis will give their all.

Monk had been tipped to join the club's backroom staff as part of a mooted reshuffle of the coaching set-up, but instead finds himself in the role of head coach.

Swansea legend Curtis, already part of the coaching team at the Liberty Stadium, will assist Monk as they seek revenge over the Bluebirds for their 1-0 Premier League defeat in November.

"Garry has been a terrific servant to Swansea over the years and I'd like to wish him all the very best and... hope they can get the results," Toshack added.

"Curt is an institution at the club, I know him very well - I put him in the team, sold him, brought him back, played with him for Wales.

"I think there'll be players at Swansea, as there always are at football clubs, who will be disappointed to see Michael go and maybe there will be a few as well who'll feel it will give them a better opportunity."

Swansea face Cardiff in the Premier League on Saturday, with just three points separating the Swans in 12th and the Bluebirds in 19th.

Watch the full interview with John Toshack on Sport Wales this Friday from 21:30 GMT