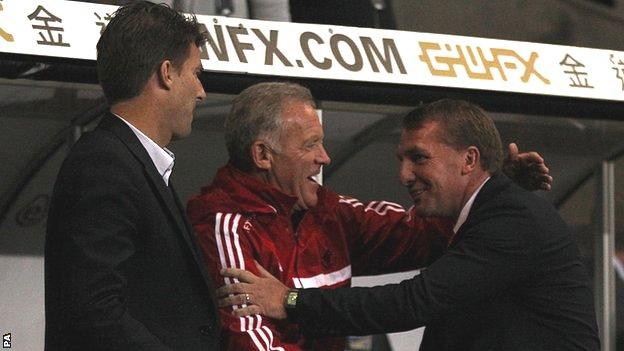 Rodgers, who was the Swans' boss for two seasons before leaving to join Liverpool, says the club have a history of making "correct decisions".

"It's always sad when a manager loses his job - and Michael has done an excellent job - but they feel they have had to make a change," he said.

Laudrup was sacked on Tuesday after succeeding Rodgers in July 2012.

He was a wonderful captain for me - very loyal, very generous as a skipper - and I have got every confidence that, in time, he's going to be a manager

"It's a real special football club," added Rodgers. "They've made the correct decisions over a decade to get from League Two to being an established Premier League team."

The Northern Irishman added that Monk has managerial potential.

"He was a wonderful captain for me - very loyal, very generous as a skipper - and I have got every confidence that, in time, he's going to be a manager," Rodgers told BBC Sport.

"Gary is going to be a very good manager."

Monk has already pledged to do all he can to guide Swansea to Premier League safety.

"I will ensure the players do exactly the same," said the 34-year-old, who has captained the club in all four divisions.

Monk took his first training session on Wednesday morning and has been put in charge of team affairs for the foreseeable future.

That includes preparing the team for their derby against South Wales rivals Cardiff City at the Liberty Stadium on Saturday.

The Swans go into that game 12th in the table after just one win in their last 10 only two points ahead of the bluebirds in 19th.

"I will make sure we stick together," he added. "That is what Swansea City has been all about for as long as I can remember.

"I know this club inside out and I will try and use that knowledge to the betterment of Swansea City.

"I also know how important this football club is to the fans. They are the important ones in all this and we will all fight every inch of the way for them."

Monk will be assisted by Swansea legend Alan Curtis, who has been at the club for over 30 years as both a player and a member of the backroom staff.

Rodgers said the club is in good hands.

"They've got people with a real passion and love for Swansea - and that's what they need," he said.