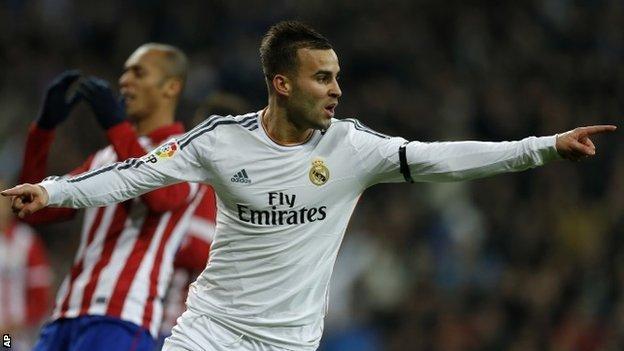 Real Madrid closed in on the Copa del Rey final with a 3-0 first-leg win over Atletico Madrid in a niggly semi-final.

The hosts, who rested Gareth Bale, took the lead when Pepe's effort cannoned in off Emiliano Insua.

Jese poked home from Angel Di Maria's smart pass before the latter saw his own shot deflect off Miranda and past Thibaut Courtois to add to Real's lead.

Atletico had few chances and will miss striker Diego Costa for the return after he was booked in the second half.

Costa, whose 20 goals in 22 league games have played a large part in Atletico's climb to the top of the table, was the focus of much of the Real early attention, not all of it legitimate.

After a roughhouse challenge from Pepe, Real defender Alvaro Arbeloa tested Costa's patience further by raking his studs down the striker's Achilles tendon as the pair waited for a free-kick.

Costa, whose readiness to go to ground under the slightest contact did little to endear him to the Bernabeu crowd, finally saw yellow as he reacted to a challenge from Di Maria and earned a suspension that will keep him out of the second leg.

Even with Costa at his disposal, manager Diego Simone would struggle to wrestle the tie back in Atletico's favour.

When periods of play did break out amid the fouls and stoppages, Real were the more impressive side.

Homegrown 20-year-old Jese looked particularly dangerous for the hosts and got the goal his performance deserved when he nudged home from Di Maria's clever, reverse ball.

By that stage, Real had already taken the lead via a cruel deflection and gone close through a well-struck Luka Modric volley.

Modric did well in defence, clearing off the line to deny Diego Godin an away goal and help ensure Iker Casillas a club record eighth successive clean sheet.

A little over a minute later, a second fortuitous ricochet - this time off Miranda - left Courtois helpless and Atletico almost certainly out of the tie.

Real are likely to face Barcelona in the final after the Spanish champions beat Real Sociedad 2-0 at the Nou Camp in their first leg.