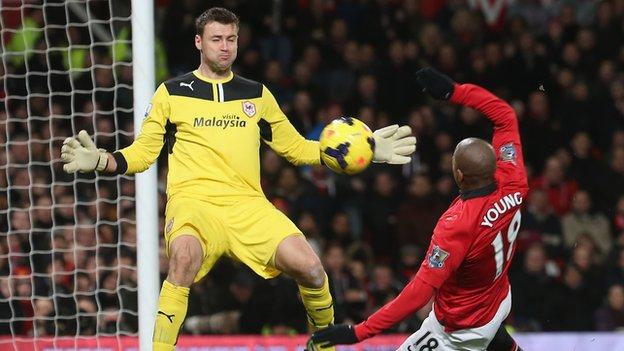 Cardiff City goalkeeper David Marshall has signed a new long-term contract until the end of the 2017-18 season.

Marshall, now in his fifth season with the Bluebirds, has been one of his side's most consistent Premier League performers.

"This is fantastic - we're delighted to have been able to tie David down for the foreseeable future," said Cardiff manager Ole Gunnar Solskjaer.

"This is welcome news ahead of Saturday's south Wales derby and it's great timing for him and us as we look towards the remainder of the season.

"We're trying to build towards the future and David has shown that he's one of the very best.

"I think this gives everybody at the club a boost. We know now that we have one of the best goalkeepers in the country committed to us for years to come.

"This is a signal that we are serious as to our intentions for the future and that we are committed to keeping the best players here at Cardiff City."

Marshall has made 88 saves to date this season - more than any other Premier League goalkeeper - and has kept five clean sheets.

He signed for Cardiff City in the summer of 2009, leaving then League One club Norwich City, and has missed just one league game for the Bluebirds since November 2011.

"I've had a fantastic four and half years here already and I'm looking forward to enjoying many more with the club," said Marshall.

"It's a privilege to be part of what we're trying to achieve and the fans have been brilliant to me from day one.

"We've a lot of hard work left to do this season, but we're a confident group and have plenty of ability and belief.

"Not having my contract to think about anymore is a relief and it means I can continue focusing on helping us win football matches."