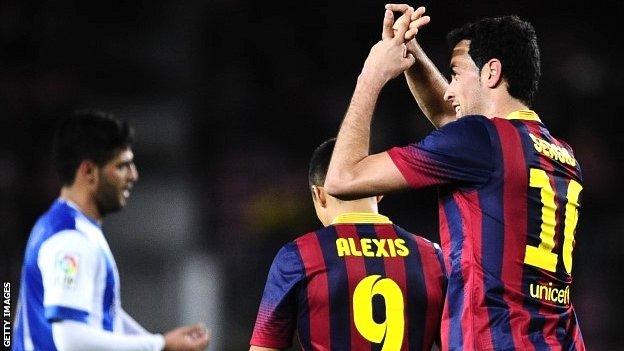 Barcelona are on course to meet Real Madrid in the Copa del Rey final after beating 10-man Real Sociedad 2-0 in the semi-final first leg at the Nou Camp.

The hosts' Javier Mascherano escaped punishment for pulling back Carlos Vela shortly before Sergio Busquets tapped in to put Barca ahead.

Barcelona have won the Copa del Rey more than any other side - a total of 26. Their most recent victory came in 2012 when they beat Athletic Bilbao 3-0.

But only a bizarre own goal - when the ball cannoned off goalkeeper Enaut Zubikarai - was added to the scoreline.

Barcelona suffered their first home league defeat since April 2012 on Saturday - losing 3-2 to Valencia- but normal service was restored for the most part at the Nou Camp.

Lionel Messi went closest to scoring early on, missing his kick with the goal gaping and hitting the bar with a free-kick before the opener arrived from an less likely source in anchorman Busquets.

Sociedad were understandably enraged by the failure to award either a penalty or red card for Mascherano's tug on Vela and Martinez's dismissal only added to their sense of injustice.

They may be relieved however that Gorka Elustondo's inexplicable clearance against Zubikarai was the only other goal they conceded before the 12 February return.

Earlier in the day, Real Madrid beat city rivals Atletico 3-0 in the first leg of their semi-final at the Bernabeu.