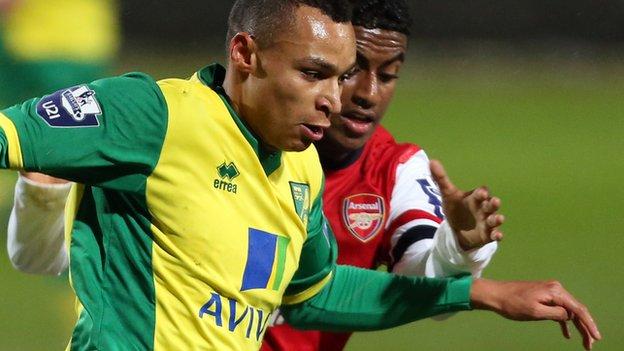 The winger, 18, made his senior debut for the Canaries as a substitute in the 1-1 FA Cup draw with Fulham last month.

"I think that's one we've almost done. We can't sign anyone until Saturday, but I think it's more or less agreed," Cooper told BBC Sport.

The loan window opens on Saturday and players registered before noon can feature in games that day.

Murphy and his twin brother Josh were members of Norwich's FA Youth Cup-winning side last season but Josh has had more of an impact on the first team, having played 11 times this term.

Swindon are currently eighth in League One and face Port Vale at the weekend, a side one position and two points below them.

Cooper will be without Jay McEveley for the trip after the full-back was sent off in Wednesday's 2-2 draw at Peterborough in the Johnstone's Paint Trophy Southern Area final.

"You get on with it. At this stage of the season every club is losing players and you have to make do with your squad," the Robins boss added.

"We brought one or two in during January. What we're not going to do is break the bank and bring people in just for the sake of it."