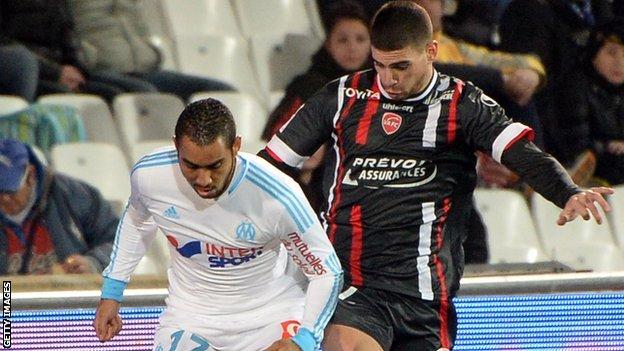 Algeria international defender Carl Medjani is hoping his move back to France can help him realise his World Cup ambitions.

The 28-year-old joined French Ligue 1 side Valenciennes on loan from Monaco, who had previously loaned him out to Greek club Olympiakos.

Medjani will stay at Valenciennes until the end of the season and he told BBC Sport: "I came to Valenciennes because I want to enjoy regular football this year and I hope to make a big impact.

"The big plan is to help the club stay in Ligue and to stay fit so I can play for my country at the World Cup in Brazil."

The former Ajaccio centre-back opted not to fight for a place in the Monaco squad because he wanted a guarantee of first-team chances.

Maybe one day I can return to England to play there. I'm not focusing on that now but if it happens, I'll be very happy

"I'm proud of Monaco but I think I need more experience to play in a big club because they bought big defenders like Ricardo Carlvalho and Eric Abidal," he said.

"It's unwise to stay in Monaco so I chose Valenciennes to remain in France and gain more experience by playing regularly in this league.

"I like Monaco as a club, love the city, fans and the management so I hope they do well and qualify for the Champions League next season."

Algeria have been drawn in 2014 World Cup group H and open against a talented Belgium side before taking on South Korea and Belgium as they aim to get to the knock-out stages for the first time.

Medjani is confident that Algeria, who failed to win a game in Mexico in 1986 and at the last World Cup in 2010, can do well on the world stage this time.

"I was in South Africa for my first World Cup but I was on the bench. This time I have a lot of motivation to arrive in Brazil with ambitions," he said.

"If we can make it past the group stage it will be historic for the country and make our fans happy.

"Belgium is one of the best teams in Europe at the moment. Russia have an experience manager with Fabio Capello. South Korea are very good and unpredictable.

"Who knows, we can give our best and surprise everyone. We know it's a tough group, maybe that's what we need to really prove that we deserve to be at the World Cup."

Born in Lyon, Medjani has been on the move since he represented France at Under-16 level in 2001.

After catching the eye with his performances at youth level with Saint-Etienne, he was signed by then Liverpool manager Gerard Houllier in August 2003 on a five-year contract.

But after his first year, Houllier had been replaced by Rafael Benitez and Medjani felt "it was difficult for a French player to play under a Spanish coach who didn't want me".

He was loaned out to Lorient for the 2004/05 season, spent the following season on loan at Metz and then in July the 2006 he signed a three-year contract with Lorient.

But he has no regrets about his time with the Reds.

"It was a good experience, when you are 18 and find yourself playing alongside fantastic players like Steven Gerrard, Jamie Carragher, Michael Owen and Emile Heskey, it is great," he said.

"Although I had to leave in 2006, Liverpool was a good experience and something that really shaped my career.

"Maybe one day I can return to England to play there. I'm not focusing on that now but if it happens, I'll be very happy."