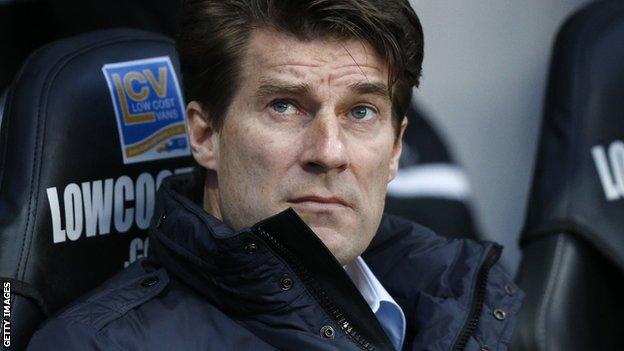 Michael Laudrup says he is considering taking legal action after being sacked as manager of Swansea City on Tuesday.

The Dane, who led the Swans to League Cup success last year, added he had not been allowed to return to the training ground to say goodbye to staff.

In a statement issued by the League Managers' Association (LMA), he claimed he is still waiting to hear the reasons why he was dismissed.

"I am, of course, taking legal advice," said Laudrup.

"The LMA have already written to the club asking for a proper explanation as to why I was summarily dismissed.

"Until we receive the response, I am unable to say any more about the termination, but I do want to take this early opportunity to thank the Swansea City fans for their continued support and say it has been an honour to manage this great football club."

Laudrup succeeded current Liverpool manager Brendan Rodgers in south Wales in June 2012 and went on to lead the Swans to their first major trophy in 2013, when they won the League Cup.

That success gave them a place in this season's Europa League, a campaign that produced a memorable 3-0 victory at Spanish top-flight side Valencia in September.

They face Napoli in the last 32 of the competition this month.

But the club's recent form in the Premier League has been poor and rumours circulated about his future following his side's 2-0 defeat at West Ham on Saturday.

It was their sixth defeat in eight Premier League games, leaving them only two points off the relegation places.

Despite the side's poor form Laudrup said he is confident he could have turned things around.

"Whilst league results have been disappointing of late, we are still 12th in the table and it is there for all to see the fine margins in the league this season in terms of points that separate 11 clubs," he said.

"Although we have been unfortunate with injuries, I believe our league form would have improved and that we would have benefited from the forthcoming Europa League and FA Cup matches."

Defender Garry Monk has been placed in charge "for the foreseeable future", assisted by Swansea attacking legend Alan Curtis, who was already part of the coaching set-up at Liberty Stadium.

Laudrup said he is "deeply disappointed" to have been sacked by Swansea and the way he was told.

He claimed he had received "the briefest of letters which gave no reasons why such hasty and final action was deemed necessary".

The former Real Madrid and Barcelona midfielder said the Capital One Cup triumph was the "obvious highlight" of his time in charge.