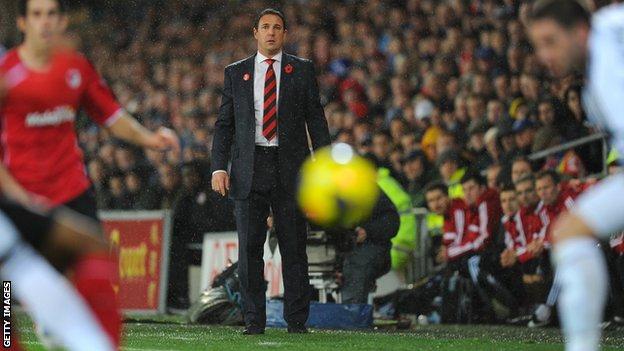 Ex-Cardiff boss Malky Mackay says he was surprised by the timing of Michael Laudrup's sacking as Swansea manager four days before the south Wales derby.

The Scot guided Cardiff to victory over Laudrup's Swans in November.

But Mackay was dismissed in December, while Swansea will be managed by Garry Monk on Saturday following Laudrup's sacking on Tuesday.

"It's surprising because there's been a lot of stability over the past six or seven years at Swansea," said Mackay.

"You can look at it one of two ways - a team can [be] galvanised or there's a little bit of disarray.

"But with such a big game, it was certainly an interesting decision to take two or three days beforehand."

The Swans, who are 12th and just three points ahead of 19th-placed Cardiff in the Premier League, have placed former captain Monk in charge for the "foreseeable future".

Former Celtic defender Mackay says the victory in over Swansea in November was one of the highlights of his career.

"I was involved in possibly the biggest derby in the world at Celtic v Rangers and coming from the east end of Glasgow you get what derbies are all about," he said.

"It was great to be involved in one [south Wales derby], live on television, in the best league in the world.

"To be standing there and for my team to win, the atmosphere in the stadium and even the feel in the city for a week or so afterwards, is always something that will live with me and it was fantastic."

Mackay was appointed Cardiff manager in June 2011 and within a year guided the Bluebirds to the Carling Cup final at Wembley, when they lost 3-2 on penalties to Liverpool after a thrilling 2-2 draw.

Last season Mackay led City to the top flight for the first time since 1962.

However, he fell out of favour with controversial owner Vincent Tan who was unhappy with the club's form and Mackay's transfer dealings.

He was dismissed on 27 December and replaced by Ole Gunnar Solskjaer within a week.

In spite of the experience, Mackay is keen on making a quick return to the game.

"I want to be a manager again," he said.

"I was very proud and honoured to be the manager of Cardiff City and enjoyed my work in the Premier League and it's certainly something that I want to do again without a doubt."