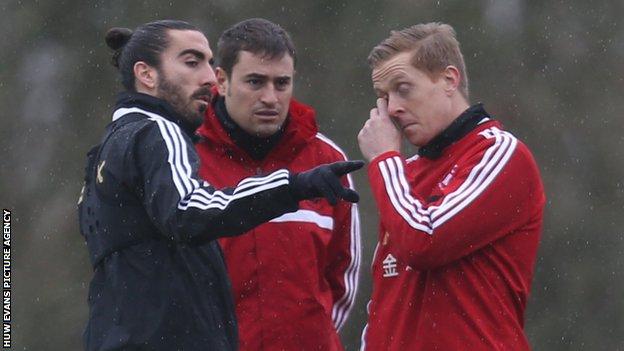 Police were called to a training ground row involving the pair in January and the club released a statement days later denying there was a rift.

Monk, in charge for the "foreseeable future" following Michael Laudrup's sacking, says the Spaniard is in contention to face Cardiff on Saturday.

"Chico will be involved in the squad," said Monk.

"Me and Chico have had a fantastic relationship, honestly.

"Everything that's gone outside of that has been blown up as usual. We expect that.

Derbies at the Liberty Stadium...

"In fact me and him have had a laugh about it quite a few times, so no problem whatsoever. Chico's a good man."

West Ham striker Andy Carroll was sent off after clashing with the Spanish defender in the Swans' 2-0 defeat at Upton Park.

It turned out to be Michael Laudrup's last game in charge of Swansea.

Monk says the players Laudrup brought into the club, including Flores, have reacted positively to his appointment.

"They've been brilliant. Couldn't have asked for anymore from all of them," said Monk.

"Genuinely they've been fantastic. I've talked to all of them individually, collectively and everyone's on the same page."

They are 12th in the Premier League, just three points above 19th placed Cardiff City, who they host on Saturday.

Monk, who has led the Swans on the field as captain in South Wales derbies before, is under no illusions about how important the fixture is, as he prepares for it as manager.

"I think it makes for a great game," he said.

"I think it's going to be an unbelievable game, especially in front of our own supporters.

"We lost the first game at their place so I guess we have to put right a wrong in our view.

"But they'll [Cardiff] be thinking the same - can they do us again."