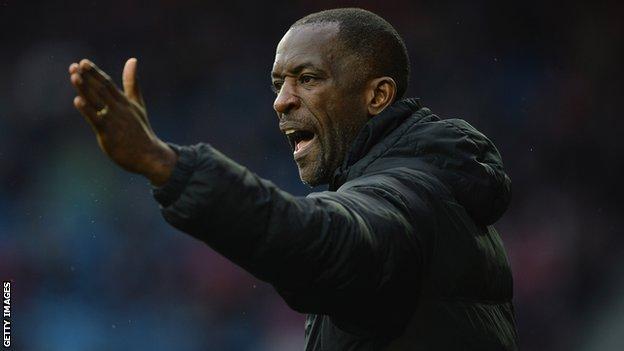 Charlton manager Chris Powell is determined to steer the club through the "testing time" following Roland Duchatelet's takeover of the club.

The Addicks, who are in the relegation zone, brought in six new faces in January but saw experienced duo Yann Kermorgant and Dale Stephens depart.

Powell told BBC London 94.9: "With a takeover happening I am sure everyone was thinking it would be utopia.

"It is never like that and I have got to lead from the front."

I would never walk away from a challenge because I am always up for those. Even if it was another club I would be the same. You have got to show loyalty and leadership

Duchatelet owns five other football clubs across Europe and five of Charlton's January signings came from those outfits.

Charlton have not won a league game since Boxing Day and are currently 22nd in the Championship table, two points from safety.

"It hasn't been an easy time as a manager," Powell added.

"You get tested all the time; whether from the players, agents and advisors, the media or supporters.

"You have to come through it, give yourself some thinking time and come up with the answer you feel is right.

"It is about seeing what the vision is and letting everyone know what mine is. This club needs to be in the Championship for two or three years but always show promise and that our long-term vision is to be in the Premier League.

"Our marker for the next 19 games is to stay in the league."

Powell says he speaks with Duchatelet "regularly, almost daily" and the duo are "are getting on ok".

Powell, made 244 league appearances for Charlton in three spells at the club as a player and was appointed manager of the south east London club in January 2011.

The 44-year-old's contract expires in the summer but, despite the uncertainty caused by the takeover period, he says it has never crossed his mind to leave The Valley.

"I don't walk away from anything," he said. "Not a chance.

"I would never walk away from a challenge because I am always up for those. I will always stand my ground and show people that in life you need to stand up for what is right.

"You have got to do your best to put over your concerns and show people exactly what you feel is right. I will always do that.

"Even if it was another club I would be the same. You have got to show loyalty and leadership and I have got to do it right now.

"At times it is not easy and I have got got pick myself up, try and do my best and try to be the manager I want to be.

"It is never going to be sweetness and light all the way through your managerial career, that's for certain."