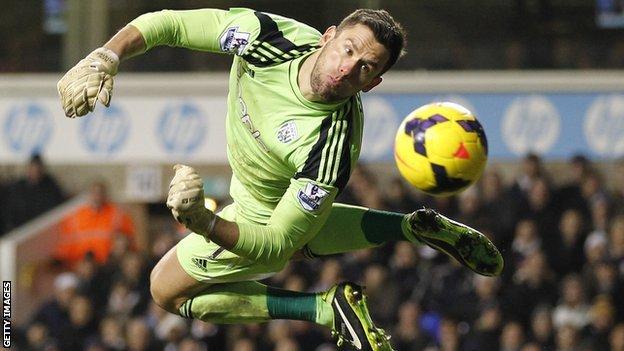 Ben Foster should be England's number one goalkeeper at this summer's World Cup, according to his West Brom manager Pepe Mel.

With Joe Hart set to be Roy Hodgson's first choice in Brazil, Foster is vying for one of the two understudy positions with Fraser Forster and John Ruddy.

But Mel said: "For me, Ben Foster is the best goalkeeper in England."

Warwick to Man Utd, via Stoke

Ben Foster joined Stoke City from non-league side Racing Club Warwick in 2001. He did not make a first-team appearance for the Potters before joining Manchester United in 2005

"He should be England's number one at the World Cup, but Hart at Manchester City is a good goalkeeper."

Foster, 30, has won six caps since making his debut against Spain in February 2007, though he did make himself unavailable for international football between May 2011 and February 2013.

The former Stoke, Manchester United and Birmingham man last played for England in the 1-1 draw with Republic of Ireland last May, coming on as a half-time substitute for Hart.

"Obviously it's normal I say this about Ben because he is my player, but he is a very, very good goalkeeper," added Mel, who took over at The Hawthorns earlier this month.

"In particular, he is very good with crosses. He has no problem dealing with them."