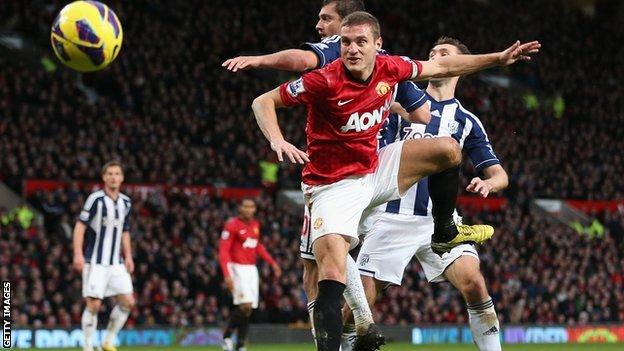 Manchester United captain Nemanja Vidic will leave at the end of this season.

The 32-year-old Serbia defender, whose contract expires in the summer, made his United debut in 2006 after a £7m move from Spartak Moscow.

Vidic told United's website: "I'm not considering staying in England as the only club I ever wanted to play for here is Manchester United.

"I never could have imagined winning 15 trophies. However I have decided I will move on at the end of this season."

He added: "I want to challenge myself again."

The Serb also helped United win the Champions League in 2008, secured by a penalty shoot-out victory over Chelsea in Moscow, as well as three League Cups.

But a cruciate knee ligament injury suffered against Basel in a Champions League tie in December 2011 ruled Vidic out for the remainder of that season, while knee surgery the following year kept him sidelined for three months.

Vidic has only made 40 appearances in the Premier League since the start of the 2011-12 season, and has just served a three-match ban following his sixth red card for United in their recent defeat by Chelsea.

His central defensive partnership with Rio Ferdinand was an important part of United's success during his time at Old Trafford, but fitness problems for both have meant the most recent of the pair's six starts together this season was in a goalless draw with Real Sociedad in November.

"I have had eight wonderful years here," added Vidic, who has made 201 Premier League appearances.

"My time at this great club will always rank as the best years of my career.

"I will certainly never forget that fantastic night in Moscow, memories that will live with me and the fans for ever."