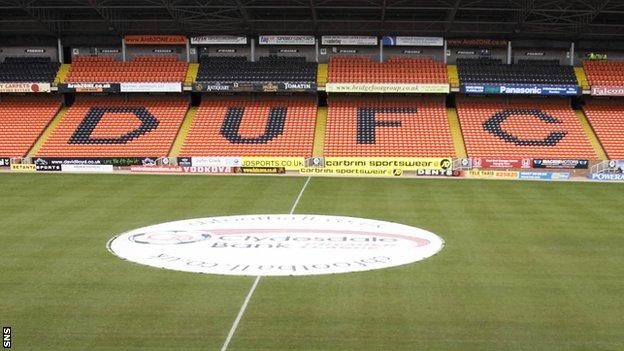 Dundee United have eliminated bank debt in a deal which means the club is no longer under pressure to sell players.

A debt of £4m has been wiped out by a group of fans who have partially paid the bank with their own funds.

United had a £3.4m term loan and a £1m overdraft, but chairman Stephen Thompson and the club's board have successfully negotiated a settlement.

The club says the deal has been possible due to the support of sympathetic investors.

BBC Scotland has learned that Thompson has worked closely with the bank in recent years to reduce the Tannadice club's debt to a level which made the settlement possible.

The club's board now feels in a position to operate the business without reliance on bank borrowings.

In recent years, the club has sold some of its key players in a bid to reduce their need for bank borrowing.

Derby County signed striker Johnny Russell from United last summer for a fee of around £750,000 and David Goodwillie was sold to Blackburn Rovers for £2m in 2011.

Midfielder Ryan Gauld, as well as defenders John Souttar and Andrew Robertson, have also been the subject of transfer speculation.

United are about to embark on a lengthy programme of community involvement, the details of which will be announced in the next few weeks, and this is supported by the investors who will now stand in place of the bank.