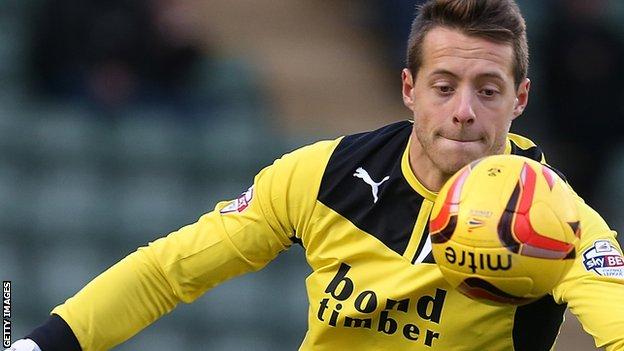 Plymouth Argyle goalkeeper Luke McCormick has been ruled out for the rest of the season with a serious finger injury, but has avoided surgery.

But Argyle have signed Sheffield Wednesday keeper Cameron Dawson on a youth loan until the end of the season.

McCormick, 30, fractured and dislocated a finger on his left hand in Saturday's draw with Mansfield Town.

Jake Cole takes over as Argyle's number one for the remainder of the season, with Dawson, 18, arriving as cover.

Ex-QPR trainee Jake Cole has made 10 appearances this term, having played 36 games as Plymouth Argyle's number one last season. He has made 85 appearances in total since moving to Home Park in 2011.

"It's very unfortunate for Luke and for us," Plymouth manager John Sheridan told BBC Radio Devon.

"He has a splint on his finger, which is probably better than having an operation.

"We hope he has a speedy recovery and that it all gets sorted out - he will have the best treatment we can give him."

Cole came off the bench to replace McCormick against the Stags and was beaten inside 10 minutes when Matt Rhead fired the visitors in front.

It was the third league goal put past the 28-year-old in two League Two appearances this term.

He has made eight appearances in cup competitions but, until Saturday's substitute appearance, had not feature in the league since August's 2-0 defeat by Fleetwood.

"I had two very good keepers and now Jake has has the chance to step in and hopefully he performs like he did at the end of last season," said Sheridan.