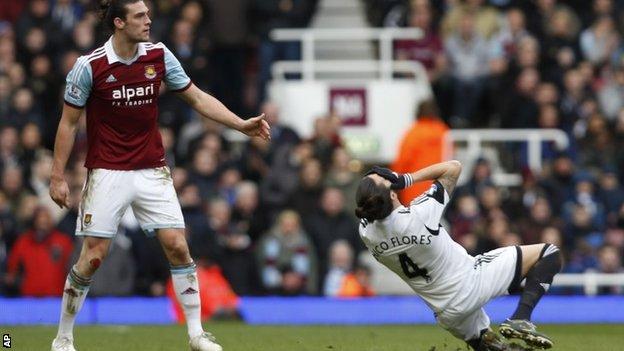 The Premier League side threatened legal action against the FA after their initial attempt to overturn the ban was turned down.

Carroll will now miss the Hammers' matches against Aston Villa, Norwich and Southampton.

In the 12 months from the start of March 2013 to the end of February 2014, Andy Carroll will have played only 15 games, scoring four goals.

He was sent off during his side's 2-0 win against Swansea last Saturday.

An FA statement said: "An independent arbitration tribunal convened under FA Rule K has dismissed a legal challenge brought by West Ham United and Andy Carroll in relation to the red card received by Carroll in the match between West Ham United FC and Swansea on 1 February 2014.

"The independent tribunal resolved that there was no serious issue to be tried and also awarded The FA its costs."

West Ham released their own statement, which said: "Whilst West Ham United are obviously disappointed at the decision, as we have made clear throughout, we respect the rules of football and shall abide by them."

The Hammers, who lie 18th in the table, also suggested the FA-appointed panel "did not apply the correct test" under its rules when making the original decision.

The move to reconsider the upholding of the initial suspension with a further hearing is a highly unusual one, and is the last stage a dispute can reach under FA rules.

It is thought to be the first time in Premier League history that a rejected red-card appeal has then been referred to an independent arbitrator.

Carroll, 25, was dismissed after clashing with Swans defender Chico Flores at Upton Park.

According to the FA, West Ham failed to prove that referee Howard Webb had made "an obvious error" in dismissing the forward, whose arm hit Flores on the top of his head as he tried to untangle himself following an aerial challenge.

Flores went to ground clutching his face but West Ham felt he had over-reacted.