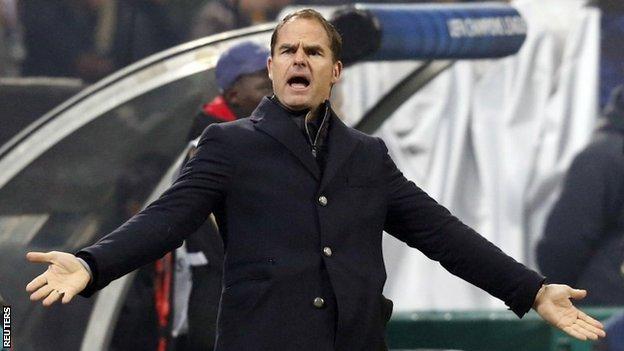 Ajax coach Frank De Boer says he would be happy to manage Liverpool or Tottenham in the future, despite rejecting approaches from both clubs.

The 43-year-old is in his fourth season in charge of Ajax, having won the title every year so far in his first managerial role.

De Boer told the BBC World Football Show: "Those two clubs are clubs that I think in the future I could be a manager of. I think the history of the clubs and what you can do with the team is my cup of tea."

But the former Ajax, Barcelona and Rangers defender added: "I'm not really thinking about it because I'm very happy here at Ajax. I'm not in a hurry to leave because everybody is still happy with me.

"I step in my car with a big smile to go to the club. I don't think I'm finished here but there will come a time when I don't like it any more or the club doesn't like me anymore. Then we have to go both ways."

And he confirmed that he has turned down the chance to talk to the Reds and Spurs in the past, adding "Liverpool especially".

"Tottenham called my manager with the possibility after sacking [Andre] Villas-Boas but I said, 'no, right now it's not the right moment'," he said.

The former Netherlands international and assistant coach, who was named Ajax boss in 2010 after the exit of Martin Jol, signed a new four-year contract in the summer.

His side went four points clear of FC Twente on Friday with a 2-1 victory at Groningen.

You can listen to the BBC World Service's World Football on iPlayer.