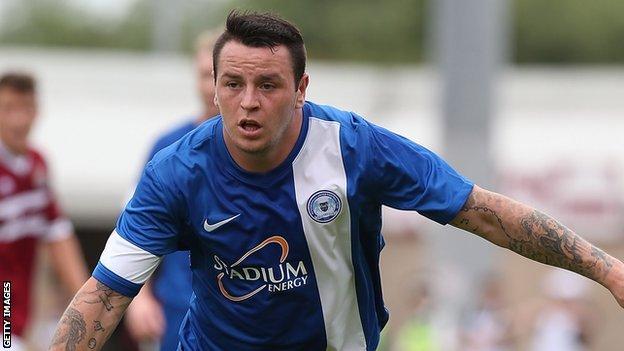 Middlesbrough's Lee Tomlin says he was not expecting to leave Peterborough during the January transfer window.

Boro signed the forward, 25, on loan with a view to a permanent move, just minutes before last Friday's deadline.

If Lee thinks [by getting sent off] we'll just let him go, he's badly mistaken. He won't be going anywhere

Earlier last month, Posh manager Darren Ferguson had warned Tomlin not to try and engineer a move away from the club.

"I wasn't expecting to move on deadline day. I spoke to Darren Ferguson the week before and he expected nothing to happen," Tomlin told BBC Tees.

"Whether that was because the club's valuation of me was too high or not, I don't know."

On 31 August, Celtic bid for Tomlin on the morning of Posh's League One defeat against Crawley Town - a game in which he was substituted at half-time.

Since then, he has been sent off three times, with two of those dismissals coming during January.

Tomlin was sent off in his final game for Peterborough, meaning he cannot make his Boro debut until 22 February's match against Leeds.

"I'll go the other way with it and he won't be going anywhere."

But Tomlin, who scored 43 times in 156 games for Peterborough, will now spend at least the rest of the season in the Championship.

"I just had my head focused on getting fitter. But this happened and I'm grateful," said Tomlin.

"I heard about Middlesbrough's interest so late on deadline day that I actually had to drive to Peterborough to sign paperwork even before a bid had been accepted.

"It's another step in the right direction for my career and I can't wait to play."