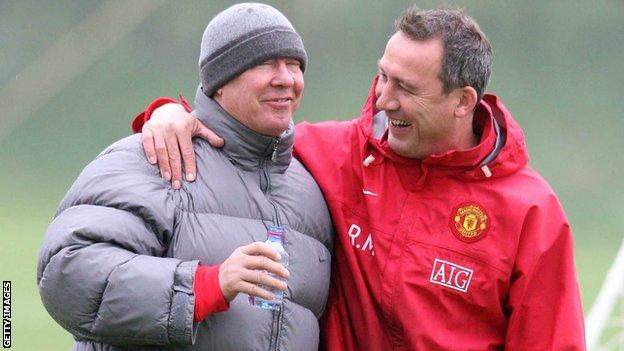 The Dutchman, first-team coach when Ferguson was in charge at Old Trafford, has only won four of 15 games since replacing Martin Jol in December.

"Sir Alex Ferguson was the first man to reassure me and say 'stick to your beliefs and know what you're capable of'," said 49-year-old Meulensteen.

Fulham, who travel to United on Sunday, are bottom of the Premier League.

Rene Meulensteen became first-team coach at Manchester United in September 2008 and he remained at the club until June 2013. During that time they won:

Ferguson's former right-hand man added: "We speak to each other about different things. It's very valuable to speak to him, he knows what I can do.

"It will be brilliant going back to Old Trafford. It has been such a special club for me and still is. I've got a lot of friends there and I will enjoy every moment of it."

During his spell as Manchester United's first-team coach, they won the Premier League title on three occasions, the Club World Cup once and the League Cup twice.

However, he has struggled in his first managerial role in England.

Fulham have lost their last four league matches and suffered a shock 1-0 home defeat against League One side Sheffield United on Tuesday in an FA Cup fourth-round replay.

"People keep saying about pressure, but it's a challenge and life throws challenges your way," said Meulensteen. "You have to rise up to the challenge and it's not one I will walk away from.

"I'm in a privileged position to be in a job like this and the fact things have gone against us means we have to work hard to turn it around.

"We need to stay positive and I can't fault the effort from the players on the training pitch."

Sunday's game could see a debut for 25-year-old Greece striker Konstantinos Mitroglou, who joined Fulham from Olympiakos for about £11m on the final day of the transfer window.

"He is an absolutely class player," said Meulensteen. "He has lifted the whole place with his energy and he is such a bright personality with a great knowledge of the game."